Unsplash/Shane Stagner
Kelp, a type of seaweed, can be fed to animals and could help to reduce greenhouse gas emissions.

If just two per cent of the Ocean were to be sustainably farmed, the world could easily be fed, according to experts. In the first story of a two-part series looking at the opportunities and challenges facing Ocean farming, we take a look at the huge potential role of seaweed in mitigating climate change, cutting marine pollution, and achieving the UN goal of Zero Hunger.

‘We are still hunter-gatherers’

“When it comes to the ocean, we are still hunter-gatherers”, says Vincent Doumeizel, a senior advisor on ocean-based solutions at the UN Global Compact, and an evangelist for seaweed. “By farming just two per cent of the ocean, we could provide enough protein to feed a world population of 12 billion people. Seaweed is extremely protein rich, low in fat, low in carbohydrates, and rich in vitamins, zinc and iron”.

As any fan of sushi will already know, certain forms of seaweed are edible for human consumption. Whilst seaweed has been popular in Asia, particularly Japan, for many years, it is slowly becoming better known throughout the rest of the world, and Mr. Doumeizel is confident that it has the potential to become a mainstream food. “Most Japanese people eat seaweed three times a day, it is used in many dishes in Korea, and is eaten by many people in China. This may be a major factor in cutting the levels of non-communicable diseases in these countries.

Mr. Doumeizel also touts the environmental benefits of seaweed, particularly as an ingredient in animal feed: “Seaweed doesn’t need land, fresh water, or pesticides, just sun and saltwater. If livestock were fed on seaweed-based foodstuffs, rather than soy, methane emissions could be cut by 90 per cent, and improve digestion whilst boosting the animals’ immune systems, which reduces the need for antibiotics. This is already happening in some countries, such as Scotland and Iceland”.

Seaweed has many other uses and benefits, as an organic fertilizer, a sustainable replacement for plastics, and an ingredient in cosmetics and medicines. It also plays a role in tackling ocean pollution, cleaning the water of nitrates and phosphates.

Given the vast range of benefits seaweed offers, why isn’t it being used more widely? Technical barriers are one reason, according to Mr. Doumeizel. “There is a lack of space to grow underwater forests near shorelines, and it can be difficult to get a licence to grow them off-shore. We need to learn from oil companies, which have a lot of experience in dealing with strong ocean currents and waves”.

In fact, one company with big plans to expand seaweed production, is run by a former executive at international oil company, Shell. Kelp Blue is planning to grow huge underwater forests of seaweed off the coast of Namibia, covering some 70,000 hectares. These forests, say the company, would help to solve the world’s food crisis whilst, at the same time, removing vast amounts of harmful greenhouse gases from the atmosphere, and creating hundreds of jobs.

They would be populated by giant kelp, a form of seaweed that can grow to 100 feet (30 metres). According to Kelp Blue, one million tons of carbon dioxide would be locked away by the forests and, because one of the main products from kelp is feed for livestock, it has the potential to remove much more, via reduced methane emissions. An added possible side benefits of the forests is a projected growth in fish stocks in the surrounding waters of up to 20 per cent, with the expectation that around 200 species would their home within the kelp.

Whilst companies like Kelp Blue appear to have solutions to technical challenges, the main obstacle that still needs to be overcome is a lack of global safety standards for seaweed products, and resistance to collaboration, in an industry still driven by relatively small companies and entrepreneurs, who are not keen to share.

To overcome this problem, the UN Global Compact has published a seaweed manifesto, which calls for internationally agreed standards, new investment efforts, and greater collaboration between governments, science and industry, to drive production to the next level.

The manifesto was officially launched one the sidelines of the 2020 UN General Assembly, at an online event which brought together several players from the private and public sector, and featured Alexandra Cousteau, grand-daughter of famed ocean explorer Jacques Cousteau, and founder of Oceans 2050, a campaign and action platform dedicated to restoring ocean health over the next thirty years.

If it succeeds, the seaweed industry could find itself playing a much greater role in fighting the climate crisis, strengthening marine ecosystems and bringing the world closer to the big prize: an end to hunger.

Hunger, the Ocean, and the UN

♦ Receive daily updates directly in your inbox - Subscribe here to a topic.
♦ Download the UN News app for your iOS or Android devices.
Zero Hunger|Life Below Water|SDG2|SDG14|climate change|SDG13

A deep dive into Zero Hunger: farming the seas 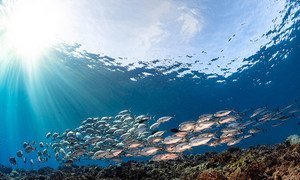