Photo: IOM
IOM teams are on ground conducting a rapid assessment of the most urgent needs of displaced individuals in the areas affected areas by Super Typhoon Goni (locally known as Rolly).
6 November 2020
Humanitarian Aid

The trail of devastation left by Typhoon Goni in the Philippines, runs straight through some heavily populated areas – including places where COVID-19 cases are high, and where returning migrants are concentrated - UN agencies reported on Friday.

According to the International Organization for Migration (IOM), southern Luzon, one of the worst affected regions, is home to more than 35,000 Filipino migrants forced to return amid the economic fallout from the coronavirus pandemic.

In addition, a COVID-19 case count of over 70,000 has “exacerbated the challenges” of emergency response efforts, especially in managing evacuation sites, the UN agency added.

As UN assessment teams make their way to some of the hardest hit areas, a clearer picture of Typhoon Goni’s impact (known locally as Rolly), which made landfall in the Philippines on Sunday, is emerging.

The UN Office for the Coordination of Humanitarian Affairs (OCHA) reported that as of 6 November, around 1.2 million people (more than 312,500 families) across seven regions have been directly impacted by the disaster.

“As more than 21,000 homes were destroyed, many families will remain in long-term displacement,” it said in a humanitarian update.

More than 225 schools are reported to have been damaged or destroyed, and 869 are being used as evacuation centres, sheltering more than 82,500 people.

Water pumping stations and electricity transmission lines in the lines in Catanduanes island, where the storm first made landfall, have been damaged. Across a narrow gulf, in the Albay region, as many as 90 per cent of the population continue to experience mobile signal and power disruption.

“Local markets are by now largely functioning and operational, despite the damage to some infrastructure, and local authorities are encouraging responders to provide cash as a modality of aid”, added OCHA.

Key immediate needs of those most affected, include: food assistance, cash or food for work, shelter repair kits; repair of water and sanitation (WASH) facilities and distribution of hygiene kits; restoration of power and communication facilities; and psychosocial support and protection.

The UN World Food Programme (WFP), supported by donors, is transporting 9,600 family food packs (35 trucks). National humanitarian actors are also assisting with blankets, tarpaulins and food packs to people in need and have set up health check points for COVID-19 in some of the most affected areas.

A UN-led overall humanitarian response plan is also being developed.

Photo: IOM
An IOM team on the ground in Camarines Sur, one of the regions badly hit by Typhoon Goni (locally known as Rolly). With transport links damaged, the team uses a boat to reach the affected areas.

Meanwhile, Tropical Storm Siony, tracking a path similar to Typhoon Goni, passed over the Batanes island in northern Philippines, according to local reports.

Siony is forecast to either maintain its current strength or slightly intensify to 100 kilometres per hour winds by Saturday morning, local time. Beyond that, the storm is forecast to significantly weaken and could be downgraded to a low-pressure area, on Monday.

Siony is classified as a ‘severe’ storm and put parts of the country under alert, with warnings of strong winds, moderate to heavy rains, and minimal to moderate storm surge. 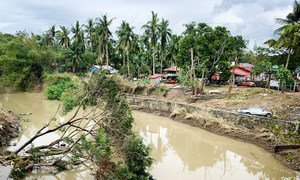 “Super storm” Typhoon Goni has left several towns inaccessible and destroyed thousands of homes in the Philippines, the UN humanitarian wing has said, adding that relief efforts have been complicated by the coronavirus pandemic.