The natural environment is also a casualty of war, Guterres warns

UNEP/GRID-Arendal/Tim Freccia
An orphaned gorilla released in its new habitat, in eastern Democratic Republic of Congo. Healthy gorilla populations are becoming increasingly isolated due to habitat loss and conflict across the region.
6 November 2020
Peace and Security

The UN Secretary-General has called for better management of natural resources and ecosystems, highlighting that doing so could pave a path towards peace in war-torn societies and help crisis-affected countries boost sustainable development.

“If we are to achieve the Sustainable Development Goals (SDGs), we need to act boldly and urgently, to reduce the risks that environmental degradation and climate change present for conflict and commit to protecting our planet from the debilitating effects of war”, António Guterres said in a message marking the International Day for Preventing the Exploitation of the Environment in War and Armed Conflict.

Conflict and the environment are deeply interlinked.

We need to act boldly & urgently to reduce the risks presented by environmental degradation & commit to protecting our planet from the debilitating effects of war. https://t.co/FKtJES9wHS pic.twitter.com/zKcv5jn8Gd

Established in 2001 by the UN General Assembly, the International Day highlights the damage to the environment in times of conflicts, and that the devastation lingers for generations, often extending beyond national territories.

While climate disruption and environmental degradation are not the direct cause of conflict, they can exacerbate the risk of conflict, said the UN chief, noting that their combined impacts undermine livelihoods, food security, confidence in government, health and education, and social equality.

“Degradation of natural resources and ecosystems adds to the challenges faced by communities who are already vulnerable in the short and long term. Women and girls are disproportionately affected”, he continued.

“Not only do natural resources underpin the delivery of many basic services, such as water or electricity, but they can also be used as a platform for trust building and benefit sharing between divided groups,” he added.

While violent conflict prevents many countries from moving forward, conflict-affected states are also less likely to reach their SDG targets. In addition, there are indications that by 2030, more than 80 per cent of the world’s poorest populations may be concentrated in countries affected by fragility, conflict and violence.

Such effects could be further complicated by rising temperatures and impact of climate change.

“Conflict and the environment are deeply interlinked. Around the world, at least 40 per cent of all intrastate conflicts have had an important natural resource dimension,” said Mr. Guterres.

“All too often, the environment is among the casualties of war, through deliberate acts of destruction or collateral damage, or because, during conflicts, governments fail to control and manage natural resources,” he added.

♦ Receive daily updates directly in your inbox - Subscribe here to a topic.
♦ Download the UN News app for your iOS or Android devices.
UN International Days|environment 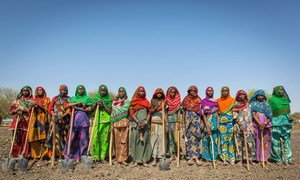 To help prevent conflicts and at the same time protect the planet, “we all must tackle environmental degradation”, a top UN official told the Security Council on Thursday.