UNDP Eurasia
A man from Bosnia and Herzegovina is still looking for his missing relatives after the war (file photo).

Despite significant progress made in Bosnia and Herzegovina since the signing of a peace deal 25 years ago this month, some politicians continue to ignore “core European values” and even glorify war criminals, the international community’s High Representative for the country told the Security Council on Thursday.

Valentin Inzko briefed ambassadors on the achievements and shortfalls of the Dayton Agreement which ended the Bosnian war following the breakup of the former Yugoslavia, among the bloodiest fighting in Europe in the past century.

While the agreement has been “a huge success” – stopping bloodshed and promoting state-building in a country divided among Bosniak, Serb and Croat communities – it brought “an imperfect peace”, according to the envoy.

“Regretfully, the international community made one great conceptual flaw during the implementation of the Dayton Agreement. We invested our trust in some politicians too early, and they used our goodwill to reinvigorate nationalistic, divisive policies, especially since 2006,” he said.

Mr. Inzko recalled that the Nuremberg trials, held in the wake of the atrocities of the Second World War, “returned a sense of right and wrong to Europe”, and saw Nazi war criminals condemned to the wrong side of history.

Similarly, the UN established the International Criminal Tribunal for the former Yugoslavia (ICTY) following the Balkan wars of the 1990s.

“Some BiH politicians have failed, however, to understand the historic lessons of Nuremberg and completely miss the point of the ICTY and its work,” he remarked.

Mr. Inzko, who has previously informed the Council about the glorification of war criminals by some politicians there, reported on the latest incident.

No place for those who glorify war criminals

He said in September, Milorad Dodik, a member of the Presidency and leader of the main Serb party, requested a moment of silence in honour of a convicted war criminal who had died recently.

Some time ago, Mr. Dodik also opened a student dormitory near the capital, Sarajevo, in honour of Radovan Karadžić, the former Bosnian-Serb leader now serving life imprisonment for genocide and war crimes, including the planning of the massacre of thousands of Bosnian Muslims in Srebrenica in July 1995.

Elections around the bend

With local elections in Bosnia and Herzegovina just days away, Mr. Inzko noted that some politicians are focused on divisive rhetoric, including talk of secession, instead of looking to the future.

He commended the Central Election Commission for organizing the 15 November vote amid extraordinary circumstances and while facing constant pressure and criticism.

The Commission is also preparing for the first election in 12 years in the southern city of Mostar, following an agreement signed in June between Croat and Bosniak leaders.

In closing, the High Representative called for a new chapter in international engagement with the country.

“For 500 years, Bosnia and Herzegovina is a country with four basic religions Islam, Catholic, and Orthodox Christians and Jews. It was the pre-empted small Europe of four religions and 16 minorities, living together for hundreds of years,” he said.

Mr. Inzko underscored the belief that together with international support, “this ancient Bosnia and Herzegovina full of values, can be recreated and invigorated again.”

COVID-19: from conflict to pandemic, migrants in Bosnia face a new challenge 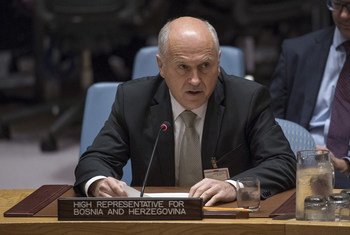