Unsplash/Andrew Keymaster
Protestors at the March of Peace and Independence in Minsk, Belarus.

Independent UN experts criticized Belarus on Tuesday for persecuting women human rights defenders, who have been involved in the mass protests underway in the country since August’s controversial presidential election.

As the Government continues to crack down on demonstrators protesting the election, Ms. Lawlor said that “women human rights defenders are being particularly targeted”.

At least three of them have come under attack simply for doing their job during September and early October: "In Belarus, as in many other countries, it takes special courage for women to stand up for human rights", upheld the UN expert.

Ms. Lawlor drew attention to the arrest of Maria Rabkova – volunteer coordinator of a human rights centre that documents freedom of assembly and other rights – who is facing between six months and three years in prison on the grounds of educating or preparing people to participate in mass riots.

"The charge against Maria Rabkova is tantamount to the criminalization of human rights work", she said. "Belarusian authorities must release her immediately and drop all charges."

The UN expert also expressed concern over the prosecution of Irina Sukhiy and Marina Dubina, human rights defenders in the environmental non-governmental organization, Ecohome, who were detained on charges of violating protest procedures.

She noted that as the case progressed, authorities changed dates, saying that one date was specified when they were arrested, but exchanged for another in court, during sentencing.

"Inconsistencies in the formal accusations brought against these two brave women raise serious questions as to the legal basis for their initial detention and subsequent sentencing", she added.

The Special Rapporteur maintained that the work of human rights defenders is more essential than ever in times of unrest.

"When the risk of human rights violations increases, the documentation work carried out by defenders becomes crucial”, Ms. Lawlor flagged. “They must not be punished for pursuing it”. 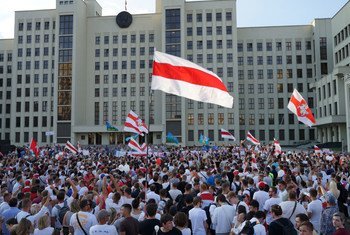 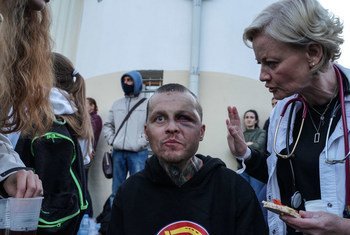