Photo: IOM
Many areas in Batangas, southern Luzon are still covered in fallen debris and floodwater due to Super Typhoon Goni (locally known as Rolly).

“Super storm” Typhoon Goni has left several towns inaccessible and destroyed thousands of homes in the Philippines, the UN humanitarian wing has said, adding that relief efforts have been complicated by the coronavirus pandemic.

The Bicol region – where typhoon Goni made its landfall on Sunday – currently has some 425 active COVID-19 cases and the risk of transmission remains high, especially in typically crowded evacuation centres, according to the UN Office for Coordination of Humanitarian Affairs (OCHA).

About 361,000 people are sheltering in evacuation centres across the affected regions while another 54,400 are hosted by relatives and friends. Bicol’s main COVID-19 laboratory has also sustained damage, prompting the suspension of testing.

The UN International Organization for Migration (IOM), one of the UN agencies involved in the response, warned that with the coronavirus pandemic, “the most vulnerable displaced populations have become even more vulnerable.”

“IOM will continue to work with our Government partners to support their monumental recovery efforts to address the most urgent humanitarian needs,” said the UN agency’s Chief of Mission in the Philippines, Kristin Dadey.

Emphasizing the critical need for proper COVID-19 precautionary measures in evacuation sites, IOM will deliver assorted personal protective equipment (PPE) including 200,000 face masks, 20,000 bottles of sanitizer, 2,000 face shields, and 500 modular tents to the Philippine Department of Social Welfare and Development and the the country’s Coast Guard.

Authorities are also deploying personnel to monitor COVID-19 symptoms among the displaced.

On the ground, assessing damage

Humanitarian teams are on the ground in some of the hardest hit areas, assessing damage.

After making landfall in Bicol, typhoon Goni (known locally as Rolly) hit the town of Tiwi in Albay province, causing rivers to overflow and flood much of the region. Thus far, some 11 towns are reported to be cut off and at least 10,000 houses destroyed or damaged, including more than 300 houses buried under volcanic rock.

Initial reports indicate damage to some 16,900 hectares of cropland, affecting about 18,000 farmers, with production losses estimated at 66,600 metric tons of rice, corn and high-value crops, valued at about $24 million.

Eleven people were reported killed in Catanduanes and Albay provinces from the onslaught of the typhoon. Numbers are feared to increase in the coming days.

Goni made two other landfalls in Quezon and Batangas provinces, progressively weakening as it crossed the Philippines Monday, sparing the capital Manila.

The UN International Organization for Migration (IOM) has deployed teams to Bicol and Regional IV to assess the needs of displaced persons. It has also rolled out its guidelines on COVID-19 and camp coordination and camp management (CCCM) and protection.

The UN Food and Agriculture Organization (FAO) will help assess the damage to agriculture as well as rehabilitation of agri-facilities. The UN Children’s Fund (UNICEF) has pre-positioned water and sanitation (WASH) items, tents for child-friendly spaces, and education materials, which can be released to partners as needed.

Photo: IOM
IOM and WFP staff visit a school that served as an evacuation center in San Francisco, Malilipot, Albay whose roof was completely torn off due to the violent winds of Super Typhoon Goni (locally known as Rolly).
♦ Receive daily updates directly in your inbox - Subscribe here to a topic.
♦ Download the UN News app for your iOS or Android devices. 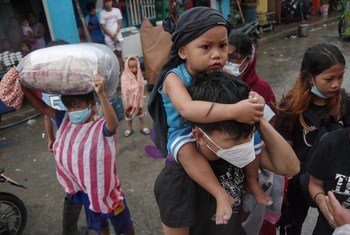 UN agencies and humanitarian actors in the Philippines are mobilizing to support communities hit by super Typhoon Goni, which has barrelled across the country, leaving massive devastation in its wake.