Vast majority of crimes against journalists yet to be resolved: UNESCO

UN Photo/Sylvain Liechti
According to UNESCO, journalism remains a dangerous profession, and in 2018-19, like in previous years, TV and local journalists were most vulnerable to violent attacks.

Vast majority of crimes against journalists yet to be resolved: UNESCO

Even though 2020 saw a “slight decrease” in the rate of impunity for crimes against journalists, 87 per cent of such cases worldwide were still not resolved, UNESCO, the UN agency tasked with defending press freedom, has reported.

According to the Safety of Journalists and the Danger of Impunity, a report by the Director-General of UNESCO, only 13 per cent of cases globally involving crimes against journalists were reported “as resolved”, in comparison to 12 per cent in 2019, and 11 per cent in 2018.

The biennial report also said that in 2018-19, a total of 156 killings of journalists were recorded worldwide, and over the past decade, a journalist was killed – on average – every four days.

As of the end of September, 39 journalists lost their lives in 2020, the report added.

“Journalism remains a dangerous profession: the threats faced by journalists are many and wide-ranging,” the UN Education, Scientific and Cultural Organization (UNESCO) said in the report, coinciding with the International Day to End Impunity for Crimes against Journalists.

The report is submitted every two years to UNESCO’s International Programme for the Development of Communication (IPDC) Intergovernmental Council, providing an occasion for UNESCO member States to take stock of global developments and discuss challenges linked to promoting the safety of journalists and combatting impunity.

The higher number of male victims may be explained by the fact that there are fewer women journalists working in dangerous areas and, at least in some regions, fewer who are assigned to cover sensitive topics such as political corruption or organized crime. The gap can be partly explained by the existence of prevailing stereotypes which sometimes prevent women journalists from being sent on assignments in high-risk areas or covering certain beats, said UNESCO.

While there are significantly fewer women journalists among the victims of fatal attacks, they are particularly targeted by offline and online gender-based attacks putting their safety at risk – these attacks can range from harassment, physical and sexual assault, trolling and doxxing – obtaining and publishing private and identifiable information.

TV and local journalists most vulnerable

Like in previous years, television journalists constitute the largest group among the victims, according to the report.

Source: UNESCO report
Number of journalists killed worldwide between 2006 and 2019.

While impunity for crimes against journalists still prevails, 2020 saw a “slight decrease” in the rate of impunity, said UNESCO.

Based on the information provided by the UN agency’s member States, the percentage of resolved cases worldwide was measured at 13 per cent in 2020, compared to 12 in 2019 and at 11 in 2018.

In 2020, compared to 2019, a higher number of States also provided responses to UNESCO’s request for information on the status of judicial enquiries into the killings of journalists, with a reaction rate of 71 per cent. 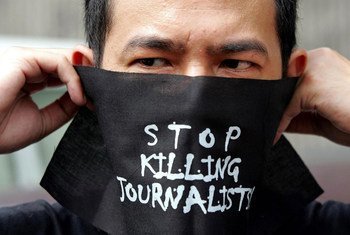 When journalists are targeted, “societies as a whole pay a price”, the UN chief said on Monday, the International Day to End Impunity for Crimes against Journalists.