UNICEF/UN0358339
Evacuees arrive at an evacuation center in Manila as super typhoon Goni made landfall in the Philippines on Sunday, November 1, 2020. The typhoon is the strongest one to hit the Philippines in 2020 as the country grapples with the COVID-19 pandemic.
2 November 2020
Humanitarian Aid

UN agencies and humanitarian actors in the Philippines are mobilizing to support communities hit by super Typhoon Goni, which has barrelled across the country, leaving massive devastation in its wake.

Typhoon Goni – known locally in the Philippines as Rolly – made landfall early morning on Sunday (local time) with catastrophically violent winds of up to 280 kilometres-per-hour and torrential rainfall within a 230-kilometer diameter of its centre.

Deeply concerned about the estimated 724,000 children in areas affected by typhoon #RollyPH. Team @unicefphils is working with the Philippine government, @UNPhilippines and partners to assess the needs of children and families. We stand ready to provide life-saving support. #Goni pic.twitter.com/4ZgYDl5Pwi

According to the UN Office for the Coordination of Humanitarian Affairs (OCHA), around 68.6 million people are affected, with 24.3 million living in the worst-hit areas. Of the 2.3 million vulnerable people living in the most affected areas, an estimated 724,000 are children.

Significant flooding and damage to infrastructure are being reported. According to initial reports, 10 people have lost their lives, including a five-year-old child, due to drowning and falling debris.

Gustavo Gonzalez, the UN Humanitarian Coordinator in the Philippines, said that relief workers have not waited for the landfall to mobilize teams and take action.

“UN agencies and humanitarian NGOs are already working with relevant Government departments and offices, Philippine Red Cross, and with private sector groups to coordinate our efforts to support the conduct of rapid needs assessments and swiftly assist the most vulnerable people caught in the typhoon’s destructive path,” he added.

‘Prepare for the worst’

Mr. Gonzalez also called on everyone to follow the guidance being given by the authorities.

“The people of the Philippines are incredibly resilient, but this is a very dangerous typhoon … we must prepare for the worst and be ready to save lives,” he said.

“In the next hours and days we must do everything in our power to save lives and ensure that no-one is left behind,” added the UN official.

UN agencies, for their part, are responding and supporting national efforts. OCHA is coordinating humanitarian sectors and is mapping humanitarian and development partners in affected areas to support impact assessments.

UN International Organization for Migration (IOM) is supporting Philippine authorities in the management of evacuation centres, while the UN World Food Programme (WFP) has received a request for logistical support to food distributions.

“Children are among the most vulnerable in any emergency. [We are] closely monitoring the situation and [are] deeply concerned for the survival, development and protection of children at risk,” said the UN agency, adding that it can “quickly mobilize partners and suppliers to augment Government supply if needed.”

National actors too have mobilized to assess the situation as well as supporting authorities in search and rescue efforts, and in providing immediate relief to hard-hit communities as the disaster unfolds. 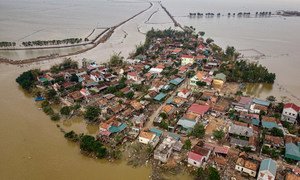 A major typhoon has struck central Viet Nam, affecting millions of people – including about 2.5 million children – in a region already reeling from the effects of severe floods, according to UN agencies in the country.