UN Photo/ICJ-CIJ
An outside view of the Peace Palace in The Hague (Netherlands), which has been the seat of the International Court of Justice since 1946.

Despite the COVID-19 pandemic, the head of the United Nations world court said on Friday that its judiciary work in The Hague, Netherlands, continued unabated.

Judge Abdulqawi A. Yusuf, President of the International Court of Justice (ICJ)  told journalists at a virtual press conference that the Court was able to “maintain its judicial output at the same level as in previous years, despite the difficult conditions” imposed by the coronavirus pandemic.

"The Coronavirus has disrupted the old tradition of in-person meetings and in-person hearings”, acknowledged Mr. Yusuf, however, he added, the Court was still able to “respond quickly to continue performing its functions under the UN Charter” by applying technologies for remote meetings and hearings. 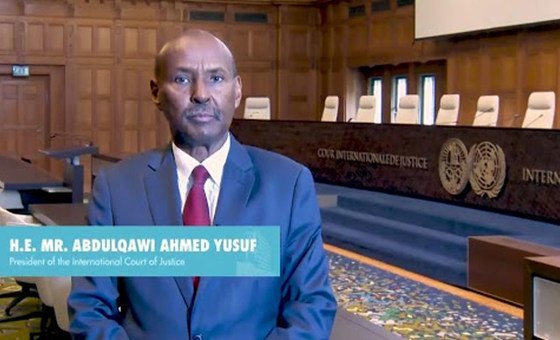 Moreover, the judge informed that over the last few years, “the Court has been receiving more cases than ever before”.

He said proudly that when comparing the number of cases submitted to the Court over the last 20 years against its first 55 years of existence, “they are almost the same”.

The Court remains a “dynamic institution that is continuously contributing to peace and harmony among nations through its adjudication of the law”, he upheld.

During the month of September, the Court held two hearings by videoconference and 15 cases are currently pending before the court.

A case in point

As the principal judicial organ of the UN, the Court adjudicates in accordance with the provisions of international law in legal disputes that arise between States, and provide advisory opinions on legal issues that may be referred to it by the UN and its specialized agencies.

In response to a question about a court ruling on October 2018 between Chile and Bolivia, Judge Yusuf expressed the courts belief that although Bolivia “presented an excellent argument…the law is what it is” and the Court ruled.

From a judicial point of view, it’s business as usual -- ICJ registrar

“Chile has not assumed any obligation, through correspondence, through statements…to allow Bolivia to enter the Pacific Ocean”, he said.

Philippe Gautier, ICJ Registrar – head of the secretariat of the Court – was pleased that the registry was able “to react swiftly in order to ensure that the Court could continue its activities”.

He explained that after two weeks, “teleworking was implemented fully” and after one month, deliberations and hearings were underway “using video links”.

“From a judicial point of view, it’s business as usual”, Mr. Gautier said, adding that “the Court is ready to deal with new cases”.

Of the six main UN organs, the ICJ is the only one located outside of New York City in the United States.