UN Photo/Eric Kanalstein
Candles and wreaths mark a mass grave site at Ovcara, Croatia, where approximately 200 civilians were massacred in 1994.

More action must be taken to protect mass graves, which provide proof of “heinous events” that must never be forgotten, an independent UN human rights expert has said, in an appeal to the international community.

Agnes Callamard, UN Special Rapporteur on summary executions, called for greater support on Tuesday, to countries and communities where these sites are located to ensure they are treated with respect, and in accordance with human rights standards.

Mass graves carry exceptional significance that transcends boundaries and generations. Their preservation, memorialization is a duty to today generations and tomorrow. We must do far more to guard and protect mass graves and guide their respectful handling https://t.co/mLDVzbFvQt pic.twitter.com/GooTfKoZ7i

“Mass graves are places of evidence crucial to effective pursuit of formal justice”, she told the UN General Assembly in presenting her annual report.

“They hold the remains of those denied identity in death. They are spaces of intimate sorrow for loved ones. And, they are places of public record - proof that heinous events took place which must never be forgotten.”

Mass graves can be found in every region of the world, said Ms. Callamard, whose mandate covers all countries.

They can be the result of repression, conflict, or linked to criminal activity, or due to natural disasters or pandemics.

Whatever the situation, “they always embody human rights violations”, she stated.

“Ours is a human history marred by massacres, in which so often those responsible have not only walked free but are later even celebrated, with statues erected in their memory gracing our court houses, town halls and local parks”, said Ms. Callamard.

“But just contrast that with the way so many killing sites and mass graves are treated: left unacknowledged, unprotected, unpreserved and, when not covered up, desecrated or destroyed.  It may even become a crime to mention them in public.”

In her report, Ms. Callamard outlines the historical and global neglect of mass graves, and the need for greater support to countries and communities.

She also highlighted the lack of a coherent human rights framework for their treatment.

“My report offers a human rights framework by which to strengthen the respectful and lawful handling of mass graves; an approach in which the diversity of the claims, rights and obligations are recognised and in which a fair balance can be struck across those many interests," she said.

The rights expert emphasized that victims’ families, as well as survivors and affected communities, must be empowered to actively and meaningfully participate in decisions surrounding the management of mass graves.

To help guarantee fair participatory processes, she recommended that a legal guardian be appointed for the mass grave.

Where relevant, crime scene managers also should be appointed.  These officials would be responsible for ensuring that decision-making processes give attention to diverse stakeholders’ claims and that State obligations are implemented.

As an independent expert, Ms. Callamard is neither a UN staff member, nor is she paid by the Organization.

She receives her mandate from the UN Human Rights Council through its special procedures mechanism for monitoring specific thematic issues, or country situations.

The Special Rapporteur called for States to further support the development of standards and best practices for the respectful and lawful management of mass graves.

The move will ensure that they are included in transitional justice and peace-making efforts and that their management is well resourced.

“More coherent human rights action must be taken also to ensure that present and future generations never forget the heinous crimes that led to these many mass graves and work actively to ensure that repetition of that violence is never allowed,” said Ms. Callamard.

“It is only through human rights-based interventions that these massacre sites of massive suffering and mass death can become sites of dignity, respect and places for the deep communal learning essential to non-repetition." 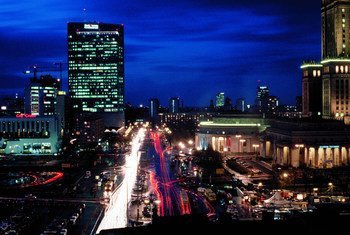