© UNICEF/Delil Souleiman
The UN Children's Fund, UNICEF has continued to delivered water to conflict-affected areas of Syria during the pandemic.
27 October 2020
Peace and Security

The so-called Small Body of the Constitutional Committee was supposed to have reconvened this month, Geir Pedersen told a video-teleconference meeting of the Security Council on Tuesday, where he again called for greater efforts towards a ceasefire.

Noting a narrowing of differences between the parties, @UNEnvoySyria Pedersen hopes to resume #Syria Constitutional Committee meetings in November in Geneva. "A wider and more credible and effective process is plainly needed." Full remarks: https://t.co/XEDBPawiLH pic.twitter.com/DEYJxlOoCM

But while the Government side wanted the agenda to focus on national foundations and principles, the opposition – represented by the Syrian Negotiation Commission – preferred to keep attention on the preamble, constitutional principles, rights and freedom, and the structure of the proposed new constitution.

“As facilitator, I proposed over a month ago a bridging compromise”, Mr. Pedersen said, adding that recent days have seen “some valuable narrowing of differences” that could pave the way to consensus between the co-chairs on the agenda for the next two meetings.

“Of course, nothing is agreed until everything is agreed, but assuming full agreement is confirmed, the plan would be to re-convene on 23 November in Geneva”, he said.

He emphasized that progress in the Constitutional Committee – which last met in August after a nine-month hiatus – could open the door to deeper and wider progress if participants work continuously and credibly, and if their efforts are matched by confidence-building steps by Syrian parties and international players.

He added that without a political deal to implement Security Council resolution 2254 (2015) – which calls for a ceasefire and political settlement to the Syrian conflict, now in its tenth year – “dangers will only accrue”.

While frontlines have not shifted in eight months, and the number of civilian fatalities reportedly at their lowest levels since 2011, violence continues, including a targeted airstrike Monday in north-west Syria followed by retaliatory shelling today.  Both incidents are reported to have generated casualties.

Tensions inside and out

Tensions meanwhile persist among the five foreign militaries active in Syria, while Security Council-listed terrorist groups, including Islamic State in Iraq and the Levant (ISIL/Da’esh), remain a significant danger, the special envoy said.

“Yet despite these incidents, front lines are not changing and it out to be possible to work towards a nationwide ceasefire while ensuring that significant continuing dangers posed by proscribed terrorist groups are addressed cooperatively and effectively, and in line with international humanitarian law,” he said.

Continued insecurity is killing civilians, #COVID19 is taking hold in camps and food is unaffordable. Too many children are out of school. Despite risks to aid workers, we continue to do our best to ease suffering. My remarks to the Security Council today: https://t.co/VH8qubcGFS pic.twitter.com/Imar7cWrI2

The 150-member Constitutional Committee is a key part the United Nations’ effort for a Syrian-owned and Syrian-led end to a devastating conflict that has seen more than 5 million Syrians flee the country, 6 million internally displaced and 13 million in need of humanitarian assistance.

It is made up of equal number of delegates from the Government, opposition and civil society, with its 45-member Small Body tasked with undertaking key preparatory work.

Briefing the Council on the dire humanitarian situation, Mark Lowcock, the UN’s top humanitarian official, said that it is particularly worrying about COVID-19 spreading in urban centres – including the capital Damascus - as well as in crowded displacement camps, settlements and collective shelters.

“The situation of families across Syria is truly desperate,” he added, with bread shortages reported in several regions and seasonal wildfires, among other factors, limited food production.  Several aid convoys have meanwhile been delayed by a lack of fuel.

♦ Receive daily updates directly in your inbox - Subscribe here to a topic.
♦ Download the UN News app for your iOS or Android devices.
syria|peacebuilding 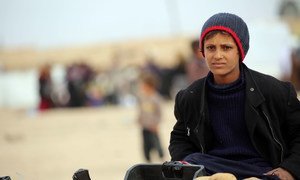 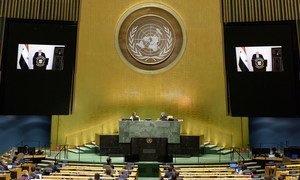 As some States continue to pursue their own narrow agendas above all else, the world is straying further from the principles that underpin international norms and the work of the United Nations, the Foreign Minister of Syria told the high-level General Assembly plenary on Saturday.