UN Photo/Eskinder Debebe
The 75th anniversary of the United Nations is marked by a ceremony in the UN General Assembly.

Seventy-five years after world leaders united to promote global peace and progress through cooperation, representatives from the international community stood in the UN General Assembly Hall on Monday to reaffirm their commitment to this promise.

The moment of silence was held during the official ceremony to commemorate UN Day, observed annually on 24 October, marking the anniversary of the entry into force of the UN Charter.

Today I convened a commemorative event to celebrate #UNDay. I thank participants for a thoughtful discussion and for joining me in hearing the testimonials from @UN staff, particularly their vision for the world we want. pic.twitter.com/TPbO8BZXsR

The ‘epicenter’ of global unity

Addressing ambassadors from the rostrum, Secretary-General António Guterres underlined the enduring power of that founding document and the importance of multilateralism.

“At its birth, the United Nations was a symbol of global unity.  Today it is the epicenter,” he said. “Our mission is more important than ever.”

The UN chief emphasized that it is only through working together that the world can fulfil ambitions such as preventing conflict, promoting sustainable development, upholding human rights and protecting the planet.

“International cooperation is the only way to defeat the COVID-19 pandemic, the climate emergency, rising inequality and the spreading of hatred,” he said.

In line with the times,  the event was held under COVID-19 prevention measures, with participants wearing face masks and maintaining physical distancing.

For the President of the UN General Assembly, Volkan Bozkir, UN Day is an opportunity to recognize the value of the United Nations and its people.

“From refugee camps to peacekeeping operations, I have personally witnessed their enthusiasm and achievements under very difficult conditions”, he said.

“They are, quite literally, putting food in people’s hands; training healthcare workers to battle COVID-19; providing school supplies to children in need; measuring the rise in sea-level; and helping to maintain peace in conflict zones.”

Voices from the field

Moise Ballo, who has spent more than 15 years with the UN World Food Programme (WFP) in Central Africa, was among four staff members who shared their perspectives from the field, and what has kept them motivated in the face of immense human suffering.

Earlier this month, WFP was awarded the Nobel Peace Prize for its lifesaving assistance to millions worldwide.  Mr. Ballo described the win as a “shared honour”, underscoring the support of local partners on the ground.

“But beyond the excitement about the recognition, we think that this is a strong message”, he said. “There cannot be peace without fighting hunger, ending hunger. And we cannot end hunger when there is conflict.”

Following the September 11 attacks nearly two decades ago, Edem Wosornu left a law career in London to join the UN humanitarian affairs office, OCHA. She has served in hotspots such as Darfur, in Sudan, and Maiduguri, Nigeria.

“What keeps me going, and what has kept me going in all those years, is because people persevere”, she told the gathering.

“The dignity of human beings is fantastic to see in the face of conflict, in the face of a natural disaster, in the face of war... And for me, I have to say, that has touched me all these years. You forget the difficult circumstances you’re working in. You just are there to help people.”

A long way left to go

Ms. Wosornu’s experience reflected comments made in the address by the current President of the UN Security Council. Russian Ambassador Vassily Nebenzia highlighted the singularity of the UN and its efforts to bring about a better world for all, though acknowledging much work lies ahead.

“It is evident that we still have a long distance to travel before the vision of the UN Charter becomes reality”, he remarked. “Together, we must work to end the senseless conflicts and violence that disrupt development, displace millions and destroy thousands of lives.”

Mr. Nebenzia called for action to deliver on the 2030 Agenda for Sustainable Development, which provides a blueprint for a more equitable world for all people and the planet.

Heads of State and Government agreed the Agenda, and the Sustainable Development Goals (SDGs), when they met at the UN five years ago.

With COVID-19 representing the greatest challenge to countries since the UN’s establishment in 1945, response and recovery efforts must be guided by Agenda 2030, and based on global solidarity and cooperation.

That was the message delivered by the Vice President of the UN Economic and Social Council (ECOSOC), Ambassador Collen Vixen Kelapile of Botswana.

Speaking on behalf of the Council’s President, he stressed that the UN must be adequately equipped if the world is to indeed deliver on the promise to leave no one behind.

“A UN fit for the purpose that we agreed to in 2015 should not be starved of the resources and capacities it requires to fulfill its mandate across the three pillars of peace, development and human rights”, he stated.

Mr. Kelapile appealed for countries to recommit to international solidarity and cooperation in responding to the COVID-19 pandemic and its impacts in a way that supports sustainable development. 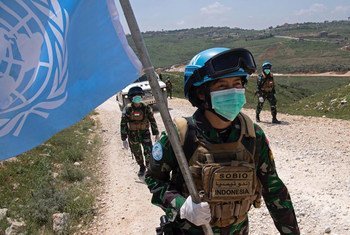 The UN’s 75th anniversary this Saturday, which falls as countries continue to battle the COVID-19 pandemic, is an opportunity to accelerate action to achieve a global ceasefire during the crisis, Secretary-General António Guterres has said.