UNICEF/Pirozzi
Children participating in a photography workshop in Libya take pictures in front of a mural in Tripoli. (file photo)
26 October 2020
Peace and Security

The UN Support Mission in Libya (UNSMIL) has announced the launch of the Libyan Political Dialogue Forum, following the signing of a permanent ceasefire agreement in the strife-torn country.

The first meeting of the Forum – to be convened virtually – was due to begin on Monday and direct, in-person meetings will commence on 9 November, in Tunisian capital Tunis, according to UNSMIL.

“The resumption of the LPDF comes at time of an overwhelming sense of hope emerged in Libya after the signing of a permanent, countrywide ceasefire agreement between Libyan parties, on 23 October in Geneva”, the UN Mission said in a statement on Sunday.

“Consultative meetings UNSMIL conducted with various Libyan constituencies in past months have paved the way for the resumption of the Libyan Political Dialogue Forum”, it added.

The Libyan Political Dialogue Forum (LPDF) is a fully inclusive intra-Libyan political dialogue established by the Berlin Conference Outcomes, last January, which were endorsed by Security Council resolutions 2510 and 2542.

It represents a variety of different constituencies, based on the principles of inclusivity, fair geographic, ethnic, political, tribal, and social representation.

The group was convened by the UN to include representatives of the House of Representatives, of the High Council of State as well as Libyan political actors who are not members of the two institutions, and with a firm commitment to the meaningful participation of Libyan women, youth and minorities.

Throughout the process, UNSMIL will ensure transparency and a rights-based approach and will continue to hear the views of all Libyans and intends to remain actively engaged, including through interactive online tools and platforms, the UN Mission said.

“Towards this end, and in order to ensure the inclusivity of the process, UNSMIL will be launching an interactive Al-Hiwar website to listen to the views of, discuss and interact with the Libyans throughout the LPDF process”, it added.

The objective of the LPDF is to generate consensus on a unified governance framework and arrangements that will lead to the holding national elections in the shortest possible timeframe in order to restore Libya’s sovereignty and the democratic legitimacy of Libyan institutions, according to UNSMIL.

“In this regard, UNSMIL commends the courageous announcement of Prime Minister Faez al-Serraj of his intention to step down and hand over power to a unified executive and his support to the political process and sense of responsibility to ensure that an orderly transition can take place”, said the UN Mission, voicing hope that Mr. al-Serraj can provide another service to the country by remaining in place until such time as the LPDF decides the way forward.

UNSMIL also expressed its gratitude to the Tunisian Government for its support for the November meeting as well as to Libya’s neighbours, the African Union, the European Union and the League of Arab States, and other members of the international community for supporting the process.

♦ Receive daily updates directly in your inbox - Subscribe here to a topic.
♦ Download the UN News app for your iOS or Android devices.
libya|ceasefire 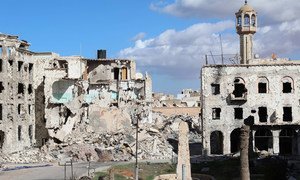