Unsplash/Tobi Oshinnaike
Nigerians protest in Lagos over the now-disbanded and discredited police unit, known as the Special Anti-Robbery Squad, or SARS.

The UN Secretary-General on Wednesday said he was closely following recent developments across Nigeria, in the wake of reports that protesters had been shot dead and wounded, and called for “an end to reported police brutality and abuses.”

António Guterres said in a statement issued by his Spokesperson, that he condemned “the violent escalation on 20 October in Lagos which resulted in multiple deaths and caused many injuries.”

As a Nigerian mother, I am deeply saddened by yet another tragedy risking the hopes of youth, for a future of dignity, justice, peace &amp; unity. Yet we must stand in solidarity to reject all violence and protect the cause of justice, lest all lives lost be in vain. pic.twitter.com/fre5CkB4ZG

According to witnesses, Nigerian security forces opened fire on Tuesday night in Africa’s largest city, as protests continued over a now-disbanded and discredited police unit, known as the Special Anti-Robbery Squad, or SARS.

The Government has pledged to carry out further police reforms, and improve police accountability.

A curfew has been imposed on Lagos and other parts of Nigeria, with reports that tensions continued into Wednesday, with police across the city firing shots in the air, in an effort to disperse protesters who were defying the order to stay off the streets.

The UN chief expressed his condolences to the families of the bereaved, and wished a speedy recovery to those injured.

He called on Nigerian authorities “to investigate these incidents and hold the perpetrators accountable.”

Mr. Guterres also urged security forces “to act at all times with maximum restraint while calling on protestors to demonstrate peacefully and to refrain from violence.”

“The Secretary-General encourages the authorities to swiftly explore avenues to de-escalate the situation”, the statement continued. “He reiterates the readiness of the United Nations to support national efforts towards finding a solution.”

The UN human rights chief, Michelle Bachelet on Wednesday, also strongly condemned the excessive and disproportionate force by Nigerian armed forces in Lagos, in a statement issued by her office, OHCHR.

She called on the Nigerian authorities to take urgent steps to deal decisively with the underlying problem of persistent violations committed by security forces, and make a far stronger effort to bring police and army personnel guilty of crimes against civilians to justice.

“While the number of casualties of yesterday’s shooting at the Lekki toll plaza in Lagos is still not clear, there is little doubt that this was a case of excessive use of force, resulting in unlawful killings with live ammunition, by Nigerian armed forces,” Ms. Bachelet said.

“Reports that CCTV cameras and lighting were deliberately disabled prior to the shooting are even more disturbing as, if confirmed, they suggest this deplorable attack on peaceful protestors was premeditated, planned and coordinated.”

The High Commissioner noted that the country “was already at boiling point before this shooting because of the revelations about years of unchecked violence, including alleged killings, rape, extortion and other violations, by the Special Anti-Robbery Squad.

“While the authorities have now dissolved SARS and announced a series of inquiries at both Federal and State levels, there have still been few if any charges levelled against its members despite abundant evidence against various members of the squad, as well as members of other security forces and the army.”

She said the continued protests are several weeks of demonstrations, was evidence that there was no public trust in the authorities’ response thus far:

“I appreciate that the Government has taken a number of measures to address the protestors’ demands,” Ms. Bachelet said. “However, the immediate creation of another elite police SWAT team to replace the SARS - without first addressing some of the root causes of police violence and putting in place sufficient safeguards to prevent future violations - has eroded the public’s trust even further. This latest terrible event in Lagos is like wantonly adding fuel to a fire that was already starting to rage out of control.”

She added that the authorities needed to take immediate concrete steps to show they are genuinely committed to tackling impunity, after years of inaction.

“There need to be immediate, independent, transparent and thorough investigations, not just into last night’s killings, but also into all the previous violations committed by security forces…Those appointed to carry out such investigations must not only be independent and impartial, but must be widely perceived as such. And, where sufficient evidence already exists to warrant charges, immediate suspension of officers – including senior officers - suspected of committing serious crimes, should take place long before the conclusion of such investigations.”

She said now was the time for “a root and branch re-examination of the entire security sector, and of its civilian oversight…This should include a full-scale review of rules of engagement and training systems and methods.”

Ms. Bachelet also called for immediate investigations into reports of violent and provocative attacks on peaceful protestors by unidentified groups armed with cudgels, cutlasses, sticks or guns, in some cases apparently with the overt backing of police or other security forces.

“Nigerians, like everyone else, have a fundamental right to peaceful assembly and protest,” the High Commissioner said.  “The Government has a responsibility to take positive measures to ensure the realization of this right, including deterring others who intend to prevent them from protesting peacefully. The world’s attention is now focused sharply on how Nigeria’s Government and security forces react over the coming days and weeks.”

“In a population with such a young median age, it is important to listen to the grievances of the younger generation and make an effort to address the multiple problems they face, which include - but are far from confined to - police brutality and violations.” 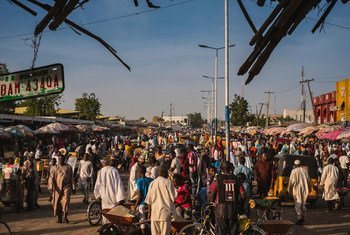 Nigerian authorities must immediately release prominent humanist and rights defender Mubarak Bala, who has been detained for more than two months without charge on accusations of blasphemy, a group of independent UN human rights experts said on Friday. 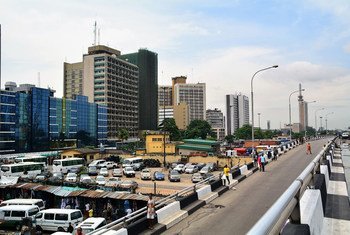 All of the UN bodies in Nigeria are working closely together, to ensure that the country’s response to the COVID-19 pandemic is effective, and saves as many lives as possible. By the UN Resident Coordinator in Nigeria, Edward Kallon.