UNOCHA/Giles Clarke
In Burkina Faso, the number of people facing a critical lack of food has increased.
19 October 2020
Humanitarian Aid

Unless access is urgently granted to humanitarian organizations, thousands in the Central Sahel will be “pushed into further destitution”, the UN emergency food relief agency warned on Monday.

Ahead of Tuesday’s High-Level Ministerial Conference on the Central Sahel in the Danish capital Copenhagen, the World Food Programme (WFP) sounded the alarm that catastrophic levels of hunger could hit parts of Burkina Faso, Mali and Niger.

The Central Sahel border region between Mali, Burkina Faso, and Niger is the epicenter of one of the world's fastest-growing humanitarian crises.

This week, the @UN and partners are meeting to raise the urgently needed support for #SahelNow. ↘️

Violence and insecurity have pushed 7.4 million people in the Central Sahel region of West Africa into acute hunger, according to WFP.

Additionally, the number of internally displaced people has risen from 70,000 two years ago to nearly 1.6 million today – including over 288,000 in Mali, more than 265,000 in Niger and over one million in Burkina Faso, which is now home to the world’s fastest growing displacement crisis.

He explained that “dreadful violence and conflict” in parts of northern Burkina Faso have left over ten thousand people there “one step short of famine”.

“The world cannot wait to take action until children, women and men have died”, stressed the WFP official.

Food deliveries on the way

As the delivery efforts of humanitarian organizations have been jeopardized by worsening conflict and insecurity, life-saving assistance to the neediest communities has become inaccessible.

WFP, which was recently awarded the 2020 Nobel Peace Prize, is urging conference participants to find ways for organisations to engage with communities and all actors on the ground to open safe passageways for humanitarian assistance to reach those in need.

Meanwhile, in response to the deepening crisis and growing needs, WFP has continued to ramp up lifesaving assistance, reaching more than 3.4 million people in August alone.

In scaling up to meet the growing needs in Burkina Faso, WFP worried about its financial outlook.

The UN agency has already been forced to reduce rations from July and risks, by next month, a break for emergency assistance to displaced people who – having fled their homes, farms and jobs – have no other options.

At the same time, WFP is working to strengthen resilience-building support for at-risk communities.

Since 2018, more than one million people have benefitted from WFP’s integrated resilience activities in Niger, Mali and Burkina Faso.

The UN is co-hosting the conference in Denmark along with Germany and the European Union.

It will feature on Tuesday, a ministerial round table that follows up on a virtual 8 September meeting, focused on forward-looking plans relating to humanitarian action, development and peace efforts, among other things. 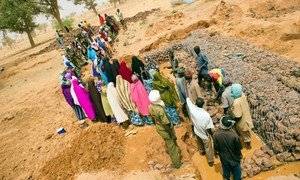 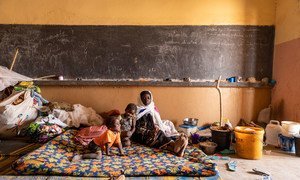