In the shadow of the COVID-19 pandemic and its continuing impact, the global economy could see a “somewhat less severe, though still deep” recession through 2020, the International Monetary Fund (IMF) has projected in its latest global economic outlook.

The revision is driven by better-than-anticipated second quarter gross domestic product (GDP) in large advanced economies, the IMF reported on Monday, noting also stronger than expected growth in China and signs of a more rapid recovery in the third quarter.

Collectively these actions have so far prevented a recurrence of the financial catastrophe of 2008-09 – Gita Gopinath, IMF

“Out-turns would have been much weaker if it weren’t for sizable, swift, and unprecedented fiscal, monetary, and regulatory responses that maintained disposable income for households, protected cash flow for firms, and supported credit provision”, Gita Gopinath, Economic Counsellor and Director of Research at IMF, said in a foreword to the report.

“Collectively these actions have so far prevented a recurrence of the financial catastrophe of 2008-09”, she added.

According to the report, with the COVID-19 pandemic continuing to spread, many countries have slowed reopening, and some are reinstating partial lockdowns. While recovery in China has been faster than expected, the global economy’s long ascent back to pre-pandemic levels, remains strewn with obstacles.

Global growth is now projected at -4.4 per cent in 2020, a less severe contraction than forecast in IMF’s June update.

In 2021, global growth is projected at 5.2 per cent, a little lower than in the June update, reflecting the more moderate downturn projected for 2020.

Following the contraction in 2020 and recovery in 2021, the level of global GDP in 2021 is expected to be a “modest” 0.6 per cent above that of 2019, said the report, adding that the growth projections imply wide negative output gaps and increasing job losses this year and in 2021, across both advanced and emerging economies.

After 2021, global growth is expected to gradually slow to around 3.5 per cent into the medium term, implying only limited progress towards projected growth for 2020-25 projected before the pandemic.

The report notes that the uncertainty surrounding the baseline projection is “unusually large”.

The forecast rests on public health and economic factors that are inherently difficult to predict, it adds, noting the unclear path of the pandemic, the needed public health response, and how countries react, most notably in contact-intensive sectors of the economy.

Sources of uncertainty also include the extent of global spillovers from soft demand, weaker tourism, and lower remittances; and uncertainty surrounding the damage to supply potential – which will depend on the level of pandemic shock, the size and effectiveness of the policy response.

Considering the severity of the recession and the possible withdrawal of emergency support measures and social protections in some countries, rising bankruptcies could compound job and income losses. In addition, fears over financial recovery could trigger a sudden stop in new lending to vulnerable economies.

♦ Receive daily updates directly in your inbox - Subscribe here to a topic.
♦ Download the UN News app for your iOS or Android devices.
World Trade|COVID-19|coronavirus|global economy 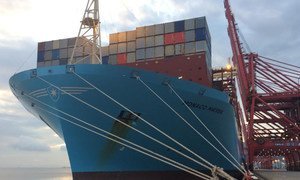