UNICEF/Louzada
A 10-year-old child helps her family look for water in southern Angola. Failed rains in the first three months of 2019 decimated crops and livestock, affecting about 2.3 million people.
13 October 2020
Climate and Environment

The State of Climate Services 2020 Report: Move from Early Warnings to Early Action, released on Tuesday by the UN World Meteorological Organization (WMO), underscored the need to switch to impact-based forecasting – an evolution from “what the weather will be” to “what the weather will do” so that people and businesses can act early, based on the warnings.

Being prepared and able to react at the right time, in the right place, can save many lives and protect the livelihoods – WMO Secretary-General

“Early warning systems constitute a prerequisite for effective disaster risk reduction and climate change adaptation. Being prepared and able to react at the right time, in the right place, can save many lives and protect the livelihoods of communities everywhere,” Petteri Taalas, Secretary-General of WMO, said in a foreword to the report.

He also highlighted that while it could take years to recover from the human and economic toll of the COVID-19 pandemic, it is crucial to remember that climate change will continue to pose an on-going and increasing threat to human lives, ecosystems, economies and societies for centuries to come.

“Recovery from the COVID-19 pandemic is an opportunity to move forward along a more sustainable path towards resilience and adaptation in the light of anthropogenic climate change,” added Mr. Taalas.

Globally over the past 50 years, some 11,000 disasters, attributed to weather, climate and water-related hazards, claimed over 2 million lives and cost the world economy $3.6 trillion, according to WMO.

In 2018 alone, storms, floods, droughts and wildfires left some 108 million people in need of international humanitarian assistance. By 2030, this number could increase by almost 50 per cent at a cost of around $20 billion a year.

In spite of the alarming figures, one in three people are still not adequately covered by early warning systems, with communities in Africa, least developed countries and small island developing States most affected, the UN agency added, citing challenges such as weak dissemination of early warning, inadequate observing networks, and insufficient capacity to translate early warning into early action.

UNICEF/Estey
Children and adults make their way, on foot and in rafts, through flooded streets to higher ground at a highway median, in eastern Jakarta, Indonesia. (January 2013) 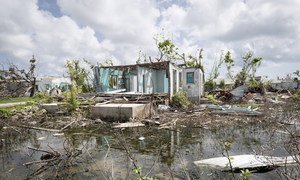