At least 13 people were killed and dozens more injured in the attack that targeted a district administrative building in Shinwar, where many civilians were present.

UNAMA outraged by killing of at least 13 civilians today in suicide attack, Shinwar #Nangarhar. Those responsible must be held to account. Extremists & spoilers need shunning, with full support to Afghans promoting a non-violent negotiated settlement to #Afghanistan conflict.

In a statement by his spokesperson, UN Secretary-General António Guterres said that those behind such crimes must be held accountable.

“The Secretary-General reiterates the urgency of achieving a peaceful settlement of the conflict. The United Nations remains committed to support the people and Government of Afghanistan in this important endeavour,” the statement added.

Mr. Guterres also expressed his deepest sympathies to the families of the victims and wished a speedy recovery to those injured.

In a separate message on its twitter account, the UN Assistance Mission in Afghanistan (UNAMA) expressed “outrage” at the killing of civilians.

“Extremists and spoilers need shunning,” it said, expressing full support to Afghans promoting a non-violent negotiated settlement to the conflict.

The attack came as representatives of the Afghan government and Taliban are engaged in negotiations in Doha, the capital of Qatar, to end the conflict in the country which has raged for four decades, claiming thousands of lives and displacing millions over the years. 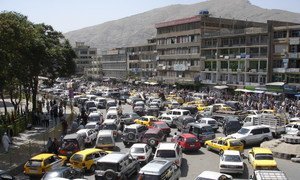