University of Oxford/John Cairns
Samples are tested by scientists at Oxford University’s Jenner Institute as the development of a vaccine against the coronavirus continues.

The UN Secretary-General on Wednesday called for all nations to provide further urgently needed funds – the equivalent of the total spent on cigarettes worldwide every two weeks – on behalf of global COVID-19 vaccine efforts to ensure that everyone, everywhere, gets protection from the virus.

The Access to COVID-19 Tools – the ACT-Accelerator – along with its COVAX Facility, is a groundbreaking global collaboration to accelerate development, production, and equitable access to COVID-19 tests, treatments, and vaccines.

#COVID19 has shaken the foundations of our economic &amp; development models. We must rebuild them on firmer footing.It's time to act boldly, in line with science, solidarity and self-interest.https://t.co/3208KpFByO pic.twitter.com/Y1Qcrrb3kv

Launched at the end of April 2020, the ACT-Accelerator has secured $3 billion, critical for its start up, but it needs a further $35 billion – including an “immediate infusion” of $15 billion – Secretary-General António Guterres said at a high-level event to mobilize support for the initiative.

“These resources are crucial now to avoid losing the window of opportunity for advance purchase and production, to build stocks in parallel with licensing, to boost research, and to help countries prepare to optimize the new vaccines when they arrive.”

Any delay would further widen already vast inequalities, he warned.

‘By helping others, countries help themselves’

Mr. Guterres outlined clearly that to reach that amount, donors’ paying in through official development assistance budgets, will not be sufficient.

“We need to think bigger. It is time for countries to draw funding from their own response and recovery programmes. By helping others, they will help themselves”, he said.

The coronavirus pandemic is costing the global economy $375 billion a month and has destroyed around 500 million jobs so far.

The Secretary-General called on developed countries – which have devoted many trillions of dollars to respond to the socio-economic impacts of the crisis in their own countries – to “invest a small fraction of that, to stop the spread of the disease everywhere.”

“I call on all countries and partners to significantly step up in the next three months to provide much needed new and additional resources and to mobilize all partners and to put everyone behind a global response to deliver. Solidarity is self-interest,” he stressed.

“Grasping that 21st-century truth is essential to end this crisis and emerge safer, smarter and stronger together,” he said, wrapping up his remarks.

‘A test of solidarity’

Amid the devastation of COVID-19, science is offering solutions, in the form of new tests, therapeutics and – hopefully – vaccines, said Tedros Adhanom Ghebreyesus, Director-General of the UN World Health Organization (WHO), speaking alongside the Secretary-General.

Science and solutions are, however, ineffective without solidarity, he added.

The head of WHO explained that the ACT-Accelerator has already delivered “impressive results” in the form of making available 120 million new rapid tests for low- and middle-income countries and securing courses of dexamethasone.

The COVAX facility, on its part, is supporting the development of vaccines, he continued, underlining that “now is the time to realize the full power of ACT-Accelerator.”

With the $35 billion financing gap – roughly equivalent to what the world spends on cigarettes every two weeks - the WHO Director-General said that fully funded, the initiative will help control the pandemic, restore confidence and stimulate the growth of the recovery.

“Frankly, this is not a financial challenge, it is a test of solidarity. This is a moment to say no to nationalism, and yes to our shared humanity,” he declared, adding “ultimately ACT is not delivering merely vaccines, diagnostics or therapeutics, it is delivering something far more important – hope.”

Philanthropist and Microsoft co-founder Bill Gates, also addressing the summit, said that a vaccine against COVID-19 will help save millions of lives as well as support the development of a plan to eliminate the disease globally.

To achieve global elimination, he outlined three necessities: capacity to produce billions of vaccines, funding to pay for them, and systems to deliver them everywhere.

“A vaccine can make COVID-19 a preventable disease, and no one should die from a preventable disease simply because the country they live in can’t afford the vaccine,” he added, urging action to ensure low- and lower-middle income countries can also access sufficient doses to protect their populations.

“The only way to eliminate the threat of this disease somewhere, is to eliminate it everywhere,” said Mr. Gates.

Mr. Gates announced that the Bill and Melinda Gates Foundation, earlier on Wednesday, had signed a new agreement with 16 pharmaceutical companies.

“In this agreement the companies commit to, among other things, scaling up manufacturing at an unprecedented speed, and making sure that approved vaccines reach broad destruction as early as possible”, he said.

The next necessity to eliminate COVID-19, is the funding to pay for those vaccines.

Mr. Gates said that the pharmaceutical industry has committed to make the products as affordable as possible, through donations, tiered pricing and foregoing profits, and underlined the need for public funding, to procure vaccines for all.

“This is where the ACT-Accelerator comes in,” said Mr. Gates, applauding the United Kingdom for donating enough money to purchase hundreds of millions of doses of vaccines for poor countries. “I want to encourage other countries to do the same”, he said.

“Finally even when we have the manufacturing capacity and the funding lined up, we will need to strengthen health systems to achieve the broad coverage to deliver the vaccine, and monitor for outbreaks”, he said, adding that lessons learnt from polio eradication efforts can be used for that purpose.

With the right diagnostics, health workers can also sound the alarm if a future disease jumps from animal to humans, said Mr. Gates, adding: “In other words, we can also be building the systems that will help reduce the damage of the next pandemic.” 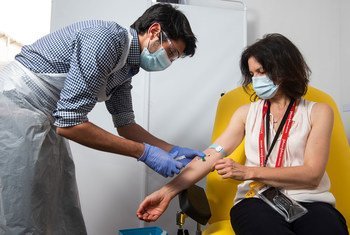 Countries which have not signed on to a global mechanism that has pledged to provide fair and timely access to a COVID-19 vaccine, are urged to do so before Friday, the head of the World Health Organization (WHO) told a virtual meeting of Member States, held on the eve of the deadline. 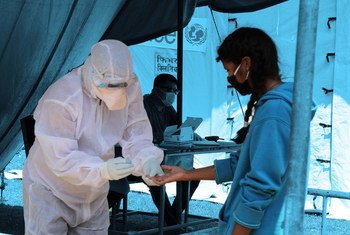 With over one million lives now lost to COVID-19 globally, UN Secretary-General António Guterres has said that while the “agonizing milestone” is a “mind-numbing figure”, the world must never lose sight of each and every individual life.