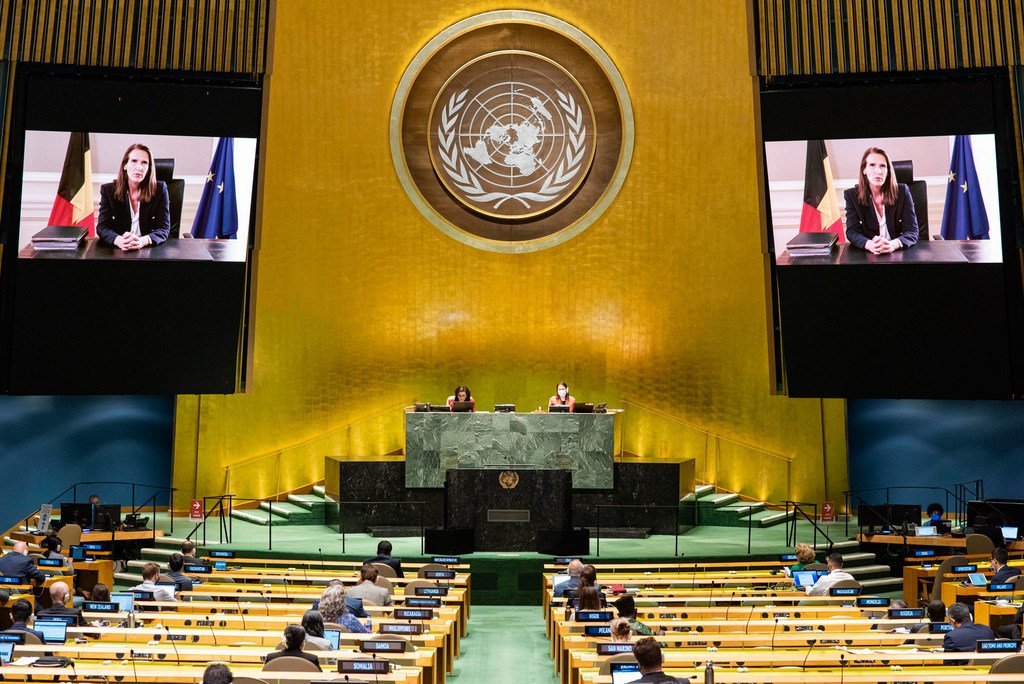 As the world continues to confront the COVID-19 pandemic and its aftershocks, we cannot ‘turn our back’ to other pressing global concerns, Belgian Prime Minister Sophie Wilmès told the UN General Assembly on Saturday.

“COVID-19 must not blind us. On the contrary, we must open our eyes to the weaknesses that this pandemic has laid bare to our societal models, for example,” she said in a pre-recorded statement.

Due to the pandemic, the annual debate for Heads of State and Government in the UN General Assembly Hall is mainly being held virtually.

Prime Minister Wilmès pointed to COVID-19’s disproportionate impact on people who already suffer heavily due to inequality, such as women, girls, children, the elderly and persons with a disability.

“At a time when we continue to combat this pandemic with strength and steely determination, as well as its consequences, we cannot nevertheless turn our back to the other major challenges facing us in the 21st century,” she continued.

“Geopolitical tensions are palpable, and conflicts rage or threaten to emerge across the globe. These tensions are simply exacerbated by the current health situation and they jeopardize the delicate balances reached in our world.”

For Ms. Wilmès, the situation in the Gulf remains of great concern.  She called for the international community to “actively seek to preserve” the 2015 agreement on Iran’s nuclear programme.

The deal, known as the Joint Comprehensive Programme of Action (JCPOA) sets out rules for monitoring the programme. It also guarantees that the UN’s nuclear watchdog, the International Atomic Energy Agency (IAEA), will have regular access to sites in the country.

“The JCPOA remains crucial to guarantee the exclusively peaceful nature of the Iranian nuclear programme,” she said.

The Prime Minister also underlined the need for peace in the Middle East.

Violent extremism and the climate crisis

Moving to the Sahel, Ms. Wilmès condemned the recent military coup in Mali, and extended her nation’s full support to regional and national efforts towards a civilian transition and the restoration of constitutional order.

Many of the challenges Mali faces are common to the wider region, such as terrorism, conflict between farmers and herders, and inter-communal tensions, she added, in calling for “a holistic approach” to counter violent extremism.

“Such an approach must emphasize good governance, the fight against impunity, the strengthening of democratic institutions, tackling the grievances of marginalized groups, as well as sustainable and inclusive development,” she advised.

Meanwhile, more regions of the world are now weathering the consequences of climate change.  Ms. Wilmès said people are being driven from their homes due to drought and “abnormal meteorological conditions” in countries such as Somalia, Yemen and Afghanistan.

“The climate emergency is a challenge for peace. There is no more time to waste,” she said. “And this is a cause behind which each and every one of us must rally.”

♦ Receive daily updates directly in your inbox - Subscribe here to a topic.
♦ Download the UN News app for your iOS or Android devices.
UNGA75|Belgium