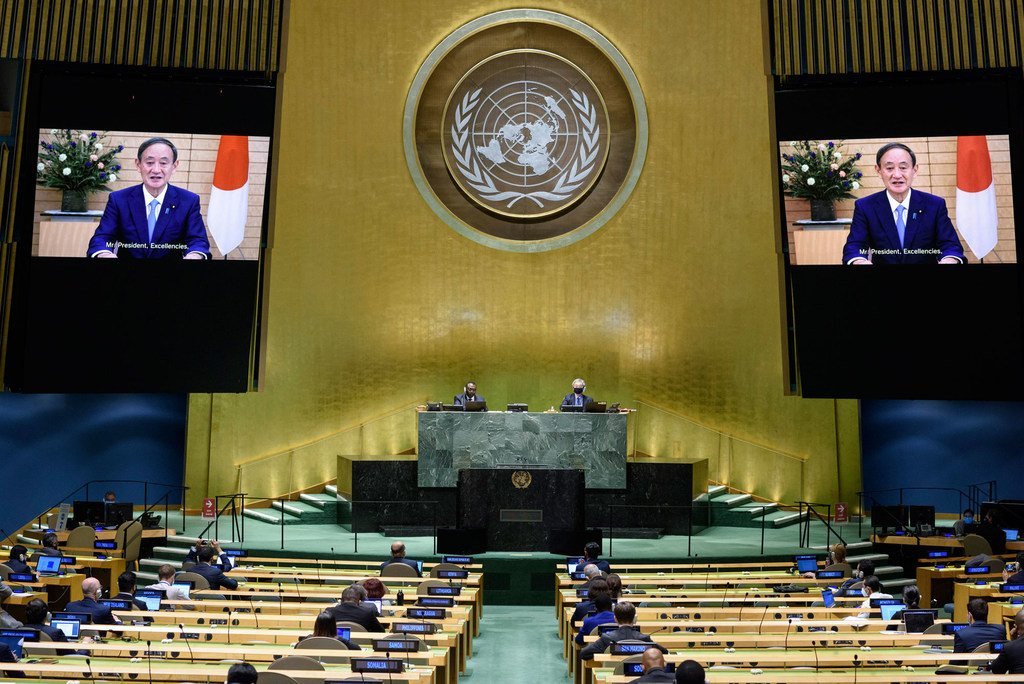 Japan has signaled its intention to take a leading role in global response to the COVID-19 pandemic and its aftershocks, with new Prime Minister Yoshihide Suga highlighting the links between recovery, health and economic development.

“As we face the current crisis, and guided by the principle of human security, I think it is essential to set the goal of ‘leaving no one’s health behind’ as we work towards achieving universal health coverage,” he said in a pre-recorded speech to the UN General Assembly on Friday.

He told world leaders gathered virtually for the Assembly’s annual high-level segment that Japan fully supports the development of therapeutics, vaccines and diagnostics against the new coronavirus disease, and is working to ensure they will be accessible to everyone, everywhere.

As the world must also prepare for future health crises, Japan has pledged to expand support to developing nations. For example, the country is working with the Association of Southeast Asian Nations (ASEAN) on the establishment of a regional centre for public health and emerging disease.

Mr. Suga reported that so far, Japan has provided over $1.5 billion in foreign aid to medical and health centres during the pandemic. “We will continue to work with other countries to improve the conditions of water, sanitation and hygiene, nutrition and other environmental factors”, he said.

At the same time, the Prime Minister emphasized that it is “critically important” to take action to revitalize developing economies hit hard by the crisis.  Here, Japan will implement a COVID-19 Crisis Response Emergency Support Loan totalling up to 400 billion Yen, or roughly $4.5 billion, over a two-year period.

As “free trade should not stop even with the restrictions caused by the crisis,” Mr. Suga again underscored the importance of universal access to a COVID-19 vaccine. Japan also will continue to promote reform of the World Trade Organization (WTO), and economic partnership agreements with other countries, among other developments.

Reform for the future

Looking to the future, Prime Minister Suga emphasized the importance of achieving the Sustainable Development Goals (SDGs) as part of overall efforts to “build back better” after the pandemic.

“The ongoing crisis is heavily impacting the education of children and the youth who shape the future. It is also affecting women among others,” he observed.

To create a more inclusive society, he again outlined three points for action, starting with ensuring the importance of the UN and multilateralism.

“While I greatly respect the activities and efforts of the UN thus far, I would also like to emphasize that the Organization is in need of neutral and fair governance more than ever,” said Mr. Suga. Thus, Japan stands ready to cooperate in the process for UN reform, including of the Security Council and the World Health Organization (WHO).

“The WHO is key in our collective response to infectious diseases,” he stated.  “Through its review and reform, I believe the WHO will be able to make even better use of necessary expertise at the right time, in the right manner.”

COVID-19 also must not jeopardize international peace and security, and Mr. Suga underscored Japan’s continued contributions in this arena.

His third point concerned the rule of law which he said must be upheld in times of increasing uncertainty, describing it as “the foundation of order, both domestic and international, and the very spirit which the UN is built on.”

♦ Receive daily updates directly in your inbox - Subscribe here to a topic.
♦ Download the UN News app for your iOS or Android devices.
UNGA75|japan|General Assembly