Speaking on Tuesday, United States President Donald Trump lauded the military power of his country, which, he said, demonstrates that the country is “fulfilling its destiny as peacemaker, but it is peace through strength”.

‘Dawn of the new Middle East’

Broadcast on the first day of the General Assembly’s annual General Debate, Mr. Trump’s comments were made in a pre-recorded video, in which he declared that spending on the US military has increased substantially, reaching some $2.5 trillion over the last four years, making it the most powerful in the world.

Referring to a recent agreement signed by Israel, the United Arab Emirates and Bahrain, the US President said that more Middle Eastern countries are due to come to the White House, and that “these ground-breaking peace deals are the dawn of the new Middle East”.

Repeating one of the themes of his 2019 address, Mr. Trump exhorted other nations to emulate America, by putting their own citizens first. This, he said, is “a true basis for cooperation”.

The US efforts to combat the COVID-19 pandemic were praised by the President, who described it as the “most aggressive mobilization since the Second World War”.

Mr. Trump said that a record supply of ventilators had been produced; that life-saving treatments have been pioneered, cutting fatality rates by 85 per cent; and that the US will produce a vaccine, beat the pandemic and enter a new era of “unprecedented prosperity, cooperation and peace”.

Describing COVID-19 as “the China virus”, the US President put the blame for the spread of the pandemic firmly on that country. Looking back to the first warnings about the virus threat, he condemned China for locking down domestic travel, whilst maintaining international flights.

The World Health Organization (WHO) also came under fire: Mr. Trump claimed that the WHO is “virtually controlled by China”, citing early declarations by China and the WHO that there was no evidence of human-to-human COVID-19 transmissions.

Turning to climate, Mr. Trump continued to attack China, blaming the country for ocean pollution, overfishing, coral reef destruction, and releasing mercury into the atmosphere. Meanwhile, the US, he claimed, has reduced its carbon emissions by more than any other signatory to the UN Paris Climate agreement.

“Those who attack America's exceptional environmental record while ignoring China's rampant pollution”, said Mr. Trump, “are not interested in the environment. They only want to punish America, and I will not stand for it.”

The United Nations itself came under the spotlight during Mr. Trump’s brief speech (which came in at seven minutes, well under the fifteen-minute limit). He called on the UN to focus on “the real problems of the world”, if it is to be effective.

Mr. Trump listed some of these problems, including terrorism, the oppression of women, forced labour, drug trafficking, human and sex trafficking, religious persecution, and the ethnic cleansing of religious minorities.

The United States, he said, will always be a leader in human rights.

The US President concluding by sharing his belief that 2021 will be one of the greatest years in human history. 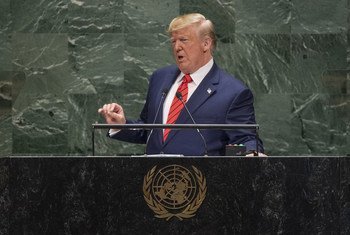 The path to peace and a better world “begins at home,” United States President Donald Trump said on Tuesday, urging countries to look after their own interests on issues like trade, people smuggling and illegal immigration, and denouncing “open border activists who cloak themselves in the rhetoric of social justice.”