IAEA
The IAEA applies safeguards to verify states are honouring their international legal obligations to use nuclear material for peaceful purposes only.

Nuclear activities in the Democratic People’s Republic of Korea (DPRK) “remain a cause for serious concern”, the head of the International Atomic Energy Agency (IAEA) said in Vienna on Monday.

IAEA chief Rafael Mariano Grossi, addressed Member States who are this week attending the agency’s annual General Conference through a combination of in-person and virtual participation.

“The DPRK’s nuclear activities remain a cause for serious concern. The continuation of the country’s nuclear programme is a clear violation of relevant UN Security Council resolutions and is deeply regrettable”, he said.

The IAEA continues to monitor the nuclear programme in the DPRK, also known as North Korea, using open source information including satellite imagery.

Mr. Grossi said the agency is “intensifying its readiness to play its essential role in verifying the DPRK’s nuclear programme”.

He urged the country to fall in line with its international obligations, including those related to the Treaty on the Non-Proliferation of Nuclear Weapons (NPT).

“I call upon the DPRK to comply fully with its obligations under Security Council resolutions, to cooperate promptly with the Agency in the full and effective implementation of its NPT Safeguards Agreement and to resolve all outstanding issues, especially those that have arisen during the absence of Agency inspectors from the country”, he said.

The IAEA chief also addressed Iran’s implementation of its nuclear-related commitments under the Joint Comprehensive Plan of Action (JCPOA).

The July 2015 deal guarantees the agency regular access to sites, as well as information about the country’s nuclear programme.  It also outlines a pathway towards easing sanctions.

Iran signed the JCPOA alongside Germany, the European Union, and the five permanent members of the UN Security Council: China, France, Russia, the United Kingdom and the United States, though Washington withdrew from the deal two years ago.

The IAEA continues to verify Iran’s compliance with its NPT Safeguards Agreement, including non-diversion of nuclear material, said Mr. Grossi, while evaluations regarding the absence of undeclared nuclear material and activities continue.

He was in Tehran last month for discussions with President Hassan Rouhani and other senior Iranian officials. Agreement was reached on the resolution “of some safeguards implementation issues”, which the IAEA had raised.

“The Agency subsequently conducted a complementary access, under the Additional Protocol, at one of two locations specified by us. Our inspectors took environmental samples which will be analysed. A complementary access at the second specified location will take place later this month,” he told the meeting.

The Director General also outlined IAEA activities since countries met last September.  He pointed out that even during COVID-19 lockdowns, staff continued implementing safeguards to prevent any misuse of nuclear material throughout the world.

The pandemic also led the UN agency to launch its largest operation ever to help countries confront the new coronavirus. So far, 1,300 consignments of equipment for virus detection and diagnosis, as well as other supplies, either have been delivered, or are in transit, to more than 120 countries.

Mr. Grossi also underlined that COVID-19 will not be the last global pandemic, and he urged representatives to support a new IAEA Zoonotic Disease Integrated Action project, known by the acronym ZODIAC.

The goal is to establish a global network of national diagnostic laboratories for monitoring, early detection and control of zoonotic diseases, using nuclear or nuclear-derived techniques.

ZODIAC will work closely with partners such as the World Health Organization (WHO) and the Food and Agriculture Organizations (FAO), both of which also are UN agencies. Countries also will have access to equipment, expertise, technology and training. 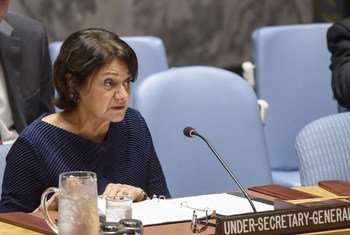