Although the transitional government in South Sudan continues to function, with state governors now appointed, among other developments, progress on the 2018 peace agreement “limps along”, the top UN official in the country told a virtual meeting of the Security Council on Wednesday.

David Shearer, head of the UN Mission in South Sudan (UNMISS), updated ambassadors on the country’s ongoing political and security situations, which are unfolding amid the COVID-19 pandemic and an upturn in inter-communal violence in Jonglei and other states.

“COVID-19 has slowed implementation of the peace agreement, including meeting key benchmarks, but the pandemic is not entirely to blame”, he said, speaking from the capital, Juba.

"No matter where people live and no matter who they are, all South Sudanese 🇸🇸 hope for peace and prosperity.Our job is to do everything we can to make that dream a reality," - SRSG David Shearer at today's #SecurityCouncil briefing. READ FULL REMARKS: https://t.co/GEqQGDBYBQ pic.twitter.com/zxO8DEd3bu

“We are seeing a reversion to ‘business as usual’ where progress on the peace agreement itself limps along.”

The peace agreement was the latest deal in efforts to end political infighting and violent conflict in South Sudan, the world’s youngest nation.

The country gained independence from Sudan in 2011 but descended into chaos roughly two-and-a-half years later following an impasse between President Salva Kiir and his former deputy, Riek Machar.

Today, South Sudan now has five vice presidents who head clusters of ministries where activities are progressing well, according to Mr. Shearer.

“Elsewhere, however, progress has been painfully slow”, he reported.  “Cabinet meetings occur irregularly, and the South Sudanese want to see the President and vice presidents meeting and working collectively.”

Meanwhile, there has been “almost no movement” on security sector reform, while the Transitional National Legislative Assembly has yet to be reconstituted, which is delaying progress on the Constitution.

Mr. Shearer said these continuing delays risk pushing elections out well beyond the timeline prescribed under the agreement, which will only add to the people’s growing disillusionment.

The UN mission chief also briefed on the violence among Nuer, Murle and Dinka communities in Jonglei State over the past six months, which has left 600 people dead and homes torched, with women and children kidnapped. The situation has since calmed though tensions remain high. Mr. Shearer said a recent meeting among senior leaders, organized by UNMISS, was encouraging.

However, the mission was thwarted in attempts to deploy peacekeepers following attacks launched by the National Salvation Front armed group in areas of Central Equatoria state, which were met by heavy government fire.

“For the past three weeks, the usual mechanisms through which UNMISS coordinates its movement have seriously deteriorated. COVID-19 can be partly blamed but the influence of hardliners in the security forces is the principal obstacle,” he said.

Later in the meeting, South Sudanese activist and feminist, Nyachangkuoth Rambang Tai, shared her concerns about the ongoing inter-communal violence and the need for greater women’s participation in governance and peacebuilding.

She called on the international community to urgently support local civil society organizations, particularly those led by women.

“Another way to help address the cycle of violence is to ensure transitional justice is made a priority. We cannot except citizens who lost their loved ones, or whose loved ones have been killed, to forgive and move on without healing and accountability.  This is unrealistic and will only encourage conflict,” said Ms. Tai, the Gender and Social Justice Manager with Assistance Missions for Africa.

Mr. Shearer outlined how South Sudan is faring in the wake of recent floods affecting some 500,000 citizens.

On Wednesday, the World Food Programme (WFP) reported that it is reaching vulnerable families with urgently needed assistance.

Aid workers have been striving to help communities impacted by the flood waters, as well as the violence, and now the pandemic.  Sometimes they pay a heavy price, as Mr. Shearer pointed out.

“This year, seven aid workers have tragically lost their lives and another 144 have been evacuated because of sub-national violence”, he said.

“This meant an upturn in violence stemming from splintering between and within groups. The difference this year is that external political actors are fuelling these local conflicts with military advice and with heavy weapons.”

COVID-19 has only added to the ongoing suffering in South Sudan. The UN Humanitarian Coordinator reported that during the annual hunger season a few months back, some 6.5 million people, or more than half the population, faced severe food insecurity.

“Overall this year, 7.5 million people now need humanitarian assistance –and that’s close to levels in 2017 when we warned of famine”, Mark Lowcock told the Council.  He added that some 1.3 million under-fives are forecasted to be malnourished: the highest figure in four years.

With the transitional government in place and a ceasefire holding, the UN Mission in South Sudan is looking at how to better support peace efforts and protect civilians.

More than 180,000 people are still living in Protection of Civilian (POC) sites at five UNMISS bases across the country, and Mr. Shearer said the conditions which led to their establishment no longer exist.

As a result, UNMISS has gradually withdrawn its troops and police from “static duties” at the Bor and Wau POC sites, following consultations with the Government and others, including displaced persons.

“The spike in subnational violence is occurring in remote areas, not near our POC sites. Therefore, we have to deploy our forces to provide protection where there is greatest need,” he said, emphasizing the need for the UN force to be robust,  nimble and proactive.

Mr. Shearer explained that following the gradual withdrawal of UN peacekeepers, the POC sites will be under the control of the Government.

He stressed that no one will be pushed out or asked to leave when this transition occurs, while humanitarian services will continue. 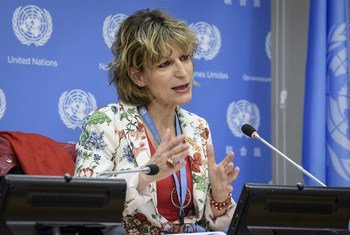