UN Member States gathered in person in Geneva on Monday for a new session of the Human Rights Council, where UN rights chief Michelle Bachelet urged countries to “rise to the occasion” to tackle injustice everywhere.

Addressing the Council on the opening day of the session, Ms. Bachelet also appealed for global solidarity to confront COVID-19, just as the World Health Organization (WHO) announced more than half a million new cases of coronavirus infection, including more than 307,000 on Saturday alone, a record daily figure.

“The world has rarely experienced a simultaneous, global shock as complex as COVID-19,” she said. “No country has been spared, yet the pandemic's medical, social and economic consequences vary widely. I am convinced that for countries across the income spectrum, human rights-based policies can help to shift these impacts from devastating, to manageable; and contribute to a recovery with better protection and greater resilience.”

The pandemic had collided with “entrenched, political, social and economic crises around the world”, the High Commissioner maintained, adding that these “underlying fractures which have made us more vulnerable to this virus – and create entry points for its harms – result primarily from political processes that exclude people's voices and gaps in human rights protection.”

Turning specifically to the Americas – ahead of separate updates on the situations in Nicaragua and Venezuela - Ms. Bachelet said the severe socio-economic impact of COVID-19 in the region should motivate action on tackling “profound inequalities in development”.

She warned that given the presence of some “fragile” democratic systems, “it may also be a warning of potentially high risks of social unrest”.

The only way to counter this was through a sustainable recovery which would address the root causes of inequalities, exclusion and discrimination.

“It will also be crucial to strengthen democracy and safeguard human rights in response to increasing levels of violence across the region”, she said.

As is customary on the opening day of each Council session, the UN rights chief also highlighted a long list of countries where ongoing violations should be addressed.

Of well over two dozen countries mentioned in the High Commissioner’s statement, Poland’s “LGBTI-free zones” were identified with concern, along with Tanzania’s “increasing repression of the democratic and civic space”, ahead of elections next month.

Ms. Bachelet also focused on the need for European Union Member States to alleviate the plight of thousands of migrants and refugees, following last week's fire at a large shelter in Lesvos, Greece, one of five across the Greek islands, before warning ongoing killings and attacks on rights activists by armed groups in Iraq – without accountability, and “deliberate bombings” of health facilities in Syria, where 9.3 million people are food insecure.

Echoing the High Commissioner’s concern over Belarus, the EU delegation led a call for a rare Urgent Debate on developments on the country, which Council Members agreed to hold this coming Friday, by a vote of 25 in favour, two against and 20 abstentions.

The initiative was necessary because of the “steep deterioration of the human rights situation” in the eastern European nation, before and after the disputed presidential election in August, said Germany’s Ambassador to the UN in Geneva, Michael von Ungern-Sternberg, head of the EU delegation.

The development followed condemnation of violence used against peaceful demonstrators in Belarus by UN Secretary-General António Guterres, who on Friday also expressed concern about the detention of people “exercising their legitimate democratic rights”.

The delegation for Belarus rejected the proposed debate, citing outside interference.

The Human Rights Council meets at least three times a year. Its current 45th session is due to sit until 6 October.

♦ Receive daily updates directly in your inbox - Subscribe here to a topic.
♦ Download the UN News app for your iOS or Android devices.
COVID-19|belarus|Tanzania|poland

UN rights chief Michelle Bachelet on Tuesday urged Russia to carry out or cooperate with a rapid and transparent criminal investigation into the poisoning of opposition activist Alexei Navalny. 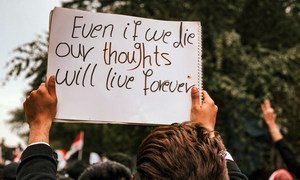 A new UN report launched on Thursday highlights human rights violations and abuses that were committed during recent demonstrations in Iraq and calls for immediate action for justice.