© UNICEF/Ron Haviv VII Photo
Children skip rope outside the Reception and Identification Centre in Moria in Lesvos, on December 15, 2018.

Fresh fires at a Greek island centre for thousands of refugees and migrants, have destroyed all remaining accommodation for those affected by the initial blaze on Tuesday evening.

In an alert on Friday, the UN refugee agency (UNHCR) said that people of all ages have been left homeless in Lesbos after further fires on Wednesday and Thursday.

We are appalled by events on Lesvos island in Greece, where fire destroyed nearly all of Moria asylum centre.UNHCR is providing emergency assistance and call for more support, inc expedited relocations of unaccompanied children + other vulnerable people. https://t.co/QvsVIeMTHr

Why they started has not been determined.

“The latest fires have affected the adjacent fields next to Moria Registration and Identification Center (RIC) …destroying what remaining accommodation was still available,” said UNHCR spokesperson Shabia Mantoo.
She said that no casualties had been reported but that the fires have left 11,500 asylum seekers without adequate shelter and sleeping out in the open.

They include 2,200 women and 4,000 children who are now “in the streets, fields and beaches”, Ms. Mantoo said. “Among them, are vulnerable people, very young children, pregnant women and people with disabilities.”

Moria Reception and Identification Center (RIC) camp has long been home to far greater number of migrants and refugees than was ever intended.

Following Tuesday’s initial fire, the International Organization for Migration (IOM) said that over 12,600 migrants and refugees have been displaced and that 80 per cent of the facility - designed to house only around 3,000 - had been reduced to ash.

Some 400 unaccompanied children minors were among those left homeless, IOM said, before welcoming the European Commission’s decision to finance their transfer from the island.

Among the UN agencies responding to the emergency, the World Health Organization (WHO) said on Friday that it was sending two emergency medical teams to the centre, following a request from the Greek authorities.

“We have one (team) from Belgium and another from Norway, they are planning to arrive tomorrow and Monday on the ground to help set up the health coordination cell to cover a range of health services people might need,” said WHO spokesperson Fadela Chaib.

The UN agency is also preparing to send medical supplies to the affected area to supplement existing services that have been partially disrupted or damaged, Ms. Chaib added.

In an appeal for solidarity for those left homeless by the fires, UNHCR on Friday urged “restraint” and for people to refrain “from actions or rhetoric that could heighten tensions”.

The UN agency also repeated its call for “long-term solutions” from the authorities and European Union for refugees and asylum seekers in Moria and other sites on the Greek islands.

UNHCR has frequently highlighted the need to address the situation and conditions for asylum seekers in the Aegean Islands, most of whom have travelled from Afghanistan (84 per cent), Iran (three per cent) and Somalia (two per cent).

“The incidents at Moria demonstrate the long-standing need to take action to improve living conditions, alleviate overcrowding, improve security, infrastructure and access to services in all five reception centres on the Greek islands,” it said in a statement. 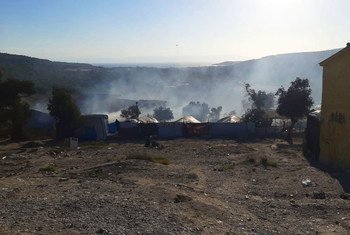 UN agencies have offered support to Greek authorities on Wednesday after a major fire ripped through an overcrowded refugee camp overnight, destroying dwellings and forcing thousands to flee, many reportedly suffering from smoke inhalation.