UNDP Honduras
India and Honduras have been working together on boosting the use of sustainable energy sources.
12 September 2020
SDGs

“The spirit of South-South cooperation and global solidarity”, is alive and well across the hemisphere as the word grapples with the COVID-19 pandemic, said the UN chief in a message relayed to countries of the Global South on Thursday.

His message ahead of the UN Day for South-South Cooperation, refers to the practical collaboration efforts among developing countries in the Global South.

This year, the commemoration was held two days prior to the official 12 September observance, and ahead of the 75th anniversary celebration of the UN.

At a Virtual High-level Commemoration and Panel Discussion on the theme “Pathways toward the Sustainable Development Goals through South-South solidarity beyond COVID-19”, Secretary-General António Guterres said in his message that developing countries are “delivering medical supplies, providing financial resources…and sharing best practices on how to fight the pandemic”.

In marking the day, “we are highlighting the power of the Global South to support and advance sustainable development, even during these challenging times”, he explained.

Standing with the South

The UN chief maintained that the Organization is playing its part in supporting South-South and triangular cooperation throughout the pandemic, including by fast-tracking financial allocations to support developing countries’ COVID-19 response and recovery efforts.

As a successful example of the practical benefits of the UN Fund for South-South Cooperation, he recalled the rehabilitation of Barbuda’s only hospital, which was damaged after Hurricane Irma devastated the Caribbean island in 2017, saying that it is now “equipped to support the community’s needs during the pandemic”.

Cooperation ‘more important than ever’

Looking beyond the immediate response, towards recovering better, the Secretary-General upheld that “South-South and triangular cooperation will be more important than ever”.

He urged everyone to coordinate efforts “to scale up Southern development successes, build a strong recovery and achieve the SDGs [Sustainable Development Goals] by 2030”.

General Assembly President Tijjani Muhammad-Bande spoke about the importance of the South-South Cooperation in the context of the Decade of Action and Delivery to implement the SDGs.

“This approach has the potential to contribute to achieving our targets on poverty eradication, zero hunger, climate change and inclusion”, he spelled out.

South-South cooperation is critical as countries contend with social and economic consequences of the pandemic.

Against the backdrop that the virus has exacerbated pre-existing inequalities; an estimated 71 million people will fall into extreme poverty by year’s end; and up to 120 million are expected to become undernourished this year alone.

Mr. Muhammad-Bande stressed the need to “focus on specific actions that will alleviate the impact on the well-being and livelihoods of people in developing countries”.

As many developing countries are confronting severe economic repercussions of the pandemic, left with little capacity for fiscal stimulus packages and rising debt levels that limit the ability to provide public healthcare and social protection, he underscored: “We must move swiftly on debt and concessional finance to support the most vulnerable people we serve”.

“We must apply a gender lens to our response planning as women have been disproportionately affected by the crisis…[and] account for the specific needs of children”, he added.

The Assembly chief said that as the world economy reboots, the Global South must “forge a more ambitious path to ensure that we build back better”.

“To safeguard the future, we must work in a sustainable manner: addressing structural problems in global and national economies and investing in human capital” he advocated, urging Member States to continue to support the UN Office for South-South Cooperation (UNOSSC) and its initiatives.

Meanwhile, Achim Steiner, head of the UN Development Programme (UNDP) said that that South-South and triangular cooperation are part of his agency’s DNA.

♦ Receive daily updates directly in your inbox - Subscribe here to a topic.
♦ Download the UN News app for your iOS or Android devices.
south-south cooperation|Developing countries

In Beijing, UN chief urges win-win collaboration between China and Africa for ‘the future we want’ 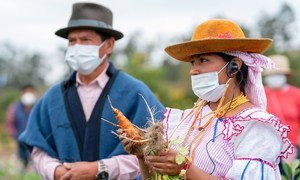 The UN Deputy Secretary-General has reminded Finance Ministers from across the world of their duty to help countries emerge from the social and economic chaos brought on by the COVID-19 pandemic. 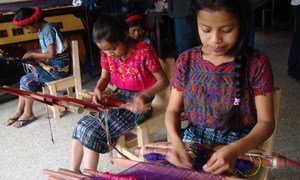 The wisdom and knowledge of indigenous people in Guatemala is central to the realization of the 17 Sustainable Development Goals or SDGs, targets agreed by countries around the world to end poverty, maintain peace and preserve the health of the planet. In this blog, the UN Resident Coordinator in Guatemala Rebeca Arias Flores explains how sustainable development is not new, but simply a new name that draws on ancient wisdom that is renewed with each generation of indigenous people.