© UNHCR
Fire damage at the Registration and Identification Centre at Moria Refugee Camp in Lesvos, Greece.
9 September 2020
Migrants and Refugees

UN agencies have offered support to Greek authorities on Wednesday after a major fire ripped through an overcrowded refugee camp overnight, destroying dwellings and forcing thousands to flee, many reportedly suffering from smoke inhalation.

Within a short span of time, three separate fires broke out at the Moria Reception and Identification Center (RIC) on the Greek island of Lesbos, according to local fire chief Konstantinos Theofilopoulos, who spoke to State television.

While initial reports suggested there were no fatalities, the International Organization for Migration (IOM) said that over 12,600 migrants and refugees have been displaced and 80 per cent of the facility - designed to house only around 3,000 - was destroyed.

A large fire destroyed an asylum center in Moria on the island of Lesvos in Greece on Tuesday night.

No casualties have been reported, thanks to local authorities who helped contain the fire. UNHCR staff are offering assistance to the Greek authorities. https://t.co/zByNrLs7d0

“This devastating tragedy compounds the already existing challenges and difficult conditions at Moria due to overcrowding and COVID-19”, said IOM chief António Vitorino.

“We are doing everything we can to support the Greek authorities and the affected migrants and refugees, to ensure their immediate care and safety as we work together on longer-term solutions”, he added.

IOM, UN refugee agency (UNHCR), the UN Children’s Fund (UNICEF) and  the European Union’s Asylum Support Office, are working closely with the Greek Government to organize the relocation of unaccompanied children and other vulnerable asylum seekers to EU Member States with the dual purpose of supporting vulnerable groups, and enhancing solidarity among States, said IOM.

“Solidarity with Greece and the people of Lesbos is needed now more than ever”, Mr. Vitorino stressed.

Meanwhile, UNHCR had immediately deployed staff on the ground and offered assistance to the Greece, amidst particular concern for asylum seekers, especially children, pregnant women, elderly people and other vulnerable populations.

The camp, which lies north-east of the island’s capital of Mytilene, has long been overwhelmed by huge numbers of refugees that have been taken in.

According to news reports, riot police, who were dispatched from Athens to the island, cordoned off roads leading from the camp to prevent fleeing migrants from entering nearby towns, as authorities struggle to find shelter for the thousands left without accommodation. The Government has also declared a four-day state of emergency.

“We have been informed about reports of tensions between people in neighboring villages and asylum seekers who were trying to reach Mytilene’s town”, UNHCR said in a statement, urging “all to exercise restraint”.

The UN agency has asked that all those who were previously staying at the camp, which was under quarantine as some 35 people had tested positive with COVID-19, to “restrict their movements” and stay nearby, while a temporary shelter solution is being sought.

Children in the fore

The UN agency thanked the local authorities and front-line responders who worked overnight to address the crisis, noting that the pandemic is complicating the situation further and underscoring the need to implement a “swift and safe response”.

With its partners, UNICEF has transformed its Tapuat Child and Family Support Hub, which is near the Moria camp, into an emergency shelter to temporarily accommodate the most vulnerable, including those with critical needs, until alternatives are identified.

More than 150 unaccompanied children are now sheltering there.

“Last night’s events serve as a strong reminder of the urgent need for a child-sensitive, humane EU Pact on Migration that respects children’s rights to adequate protection and services across Europe”, said UNICEF.

The cause of the fire has not been determined.

♦ Receive daily updates directly in your inbox - Subscribe here to a topic.
♦ Download the UN News app for your iOS or Android devices.
COVID-19|coronavirus|Lesvos|Lesbos 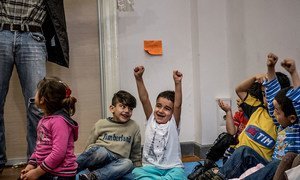 UN agencies in Greece have expressed concern at the effect that the COVID-19 pandemic is having on the education of refugee children in the country, as a charity partner warns that funding for educational programmes is on the verge of running out. 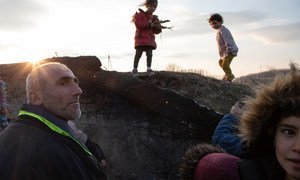 With 23 migrants at an open accommodation site in central Greece testing positive for COVID-19, the International Organization for Migration (IOM) sounded the alarm on Thursday over conditions in crowded reception centres on five Greek islands where the virus risks taking hold.