FAO/Giulio Napolitano
Women of the Batwa community tilling the soil with hoes in preparation for planting potatoes, in Gashikanwa, Burundi.

‘Hunger is a solvable problem’: UN envoy’s plan to transform food systems for all

Agnes Kalibata, the former Rwandan Minister for Agriculture, has been tasked with leading the first-ever UN Food Systems Summit. In an interview with UN News, she outlined her vision for a transformed international system that is more resilient, fairer, and less harmful to the planet. 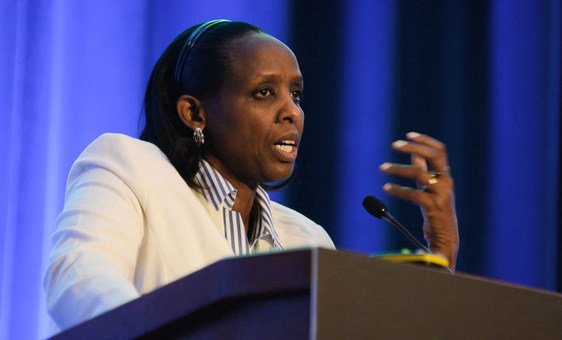 Food systems involve all the stages that lead up to the point when we consume food, including the way it is produced, transported, and sold. Launching a policy brief on food security in June, UN chief António Guterres warned of an “impending food emergency”, unless immediate action is taken.

Ms. Kalibata told UN News that her commitment to improving food systems is closely linked to her early life as the daughter of refugees.

“I was born in a refugee camp in Uganda, because my Rwandan parents were forced to leave their home around the time of colonial independence in the early 60s.

Thanks to the UN High Commission for Refugees (UNHCR), were given land, which allowed my parents to farm, buy a few cows, and make enough money to send me and my siblings to school. This allowed me to experience, first-hand, how agriculture, in a functioning food system, can provide huge opportunities for smallholder communities.

I took this appreciation with me when I eventually returned to Rwanda, as Minister for Agriculture, working with smallholders and seeing them grab every opportunity to turn their lives around against all odds. This was probably the most fulfilling period in my life.

But, I have also seen what can happen when threats like climate change, conflict and even more recently, a pandemic like Covid 19, hit the world's farmers, especially those who are smallholders, like my parents were.

As a daughter of farmers, I understand how much people can suffer, because of systems that are breaking down. I often reflect that I, and other children of farmers my age that made it through school, were the lucky ones because climate change hits small farmers the hardest, destroying their capacities to cope.

My experience has shown me that, when food systems function well, agriculture can provide huge opportunities for smallholder communities. I am a product of functional food systems, and I am fully convinced of the power of food systems to transform lives of smallholder households and communities, and bring about changes to entire economies.

I’m extremely passionate about ending hunger in our lifetime: I believe it’s a solvable problem. I don’t understand why 690 million people are still going to bed hungry, amidst so much plenty in our world, and with all the knowledge , technology and resources.

I have made it my mission to understand why this is the case, and how we can overcome the challenges we see along the way. That is why I gladly accepted the offer by the UN Secretary General to be his Special Envoy for the Food Systems Summit.

Why food systems need to change

Today’s food systems do not respond to what we need as people. The cause of death for one in three people around the world is related to what they eat. Two billion people are obese, one trillion dollars’ worth of food is wasted every year, yet many millions still go hungry.

Food systems have an impact on the climate. They are responsible for around one third of harmful greenhouse gas emissions that are causing climate change, which is interfering massively in our ability to produce food, upending farmers’ lives, and making the seasons harder to predict.

We have built up a lot of knowledge around the things that we’re doing wrong, and we have the technology to allow us to do things differently, and better. This isn’t rocket science: it’s mostly a question of mobilizing energy, and securing political commitment for change.

The main impetus behind the Food Summit is the fact that the we are off track with all of the Sustainable Development Goals (SDGs) that relate to food systems, principally ending poverty and hunger, and action on the climate and environment.

We want to use the Summit to galvanise and engage people, raising awareness about the elements that are broken, and what we need to change; to recognize that we’re way off track with the SDGs, and raise our ambitions; and to secure firm commitments to actions that will transform our current food systems for the better.

Pulling together the UN System

The UN system is already doing a lot of work in this area, and we’ve pulled together several agencies and bodies to support the Summit.

We have formed a UN Task Force to channel the existing research, so that nothing falls through the cracks, which will work closely with a core group of experts we have assembled, which is looking at scientific data pooled from institutions all around the world. At the same time, we are examining national food systems, to see what is and isn’t working.

We are going to pool all the information, evidence and ideas we receive, and create a vision for a future food system that benefits all."

At a briefing on the Food Systems Summit held on Friday, Amina Mohammed, the UN Deputy Secretary-General, noted that a transition to more sustainable systems is already underway, with countries beginning to “take action and change behaviours in support of a new vision of how food arrives on our plate.”

UN Member States, she continued, are increasingly aware that food systems are “one of the most powerful links between humans and the planet”, and bringing about a world that "enhances inclusive economic growth and opportunity, while also safeguarding biodiversity and the global ecosystems that sustain life. "

♦ Receive daily updates directly in your inbox - Subscribe here to a topic.
♦ Download the UN News app for your iOS or Android devices.
Agnes Kalibata 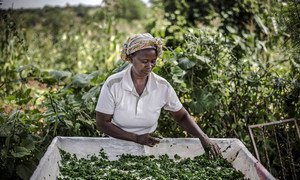 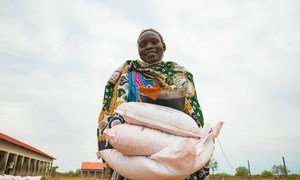 Although the COVID-19 pandemic could push nearly 50 million more people into extreme poverty, this and other dire impacts of the crisis can be avoided if countries act immediately to shore up global food security, the UN Secretary-General said on Tuesday.