A new UN report launched on Thursday highlights human rights violations and abuses that were committed during recent demonstrations in Iraq and calls for immediate action for justice.

🇮🇶 #Iraq: New @UN report looks into human rights violations and abuses during the protests that took place between October 2019 and April 2020, and calls for accountability & justice.

Despite promising steps by the current Government, the report, Human Rights Violations and Abuses in the Context of Demonstrations in Iraq, cites actions and omissions in handling the demonstrations during the time when they began up until April.

The report recommends protection measures for demonstrators and redress for victims.

Some of those targeted were described the report as influential in their local community in mobilizing protesters, or supportive of protests on social or national media.

“Of great concern is the continued targeting and killing of activists and human rights defenders”,  she contintued. “This is not random violence but a deliberate silencing of peaceful voices, coupled with the total impunity enjoyed by perpetrators”.

Based on more than 900 interviews with victims, relatives, witnesses, journalists and civic and political activists, the Human Rights Office of the UN Assistance Mission for Iraq (UNAMI) documented that at least 487 people were killed and 7,715 injured during the protests – mostly young men.

The report highlights a pattern of excessive force, including live ammunition, when dealing with protesters along with abductions and attacks by so-called unidentified armed actors.

And with some 3,000 demonstrators detained, concerns have mounted over arbitrary detentions and ill-treatment.

“Without accountability, the crimes committed will remain mere statistics, numbers on a page”, warned the UN Special Representative.

The right to freedom of expression was also severely curtailed, with frequent internet blackouts, raided news outlets and journalists assaulted, harassed and arbitrarily detained, their material confiscated or deleted.

“This is unacceptable”, she stressed.

Since taking office in May, the current Government has taken welcome steps to establish an independent investigative body and offer some redress for the victims and their families, but much more needs to be done.

“Everyone has the right to peacefully demonstrate and to publicly express their frustration at not being able to provide for themselves and their families”, Ms. Bachelet underscored.

♦ Receive daily updates directly in your inbox - Subscribe here to a topic.
♦ Download the UN News app for your iOS or Android devices.
Iraq|protests|Iraq protests|Middle East 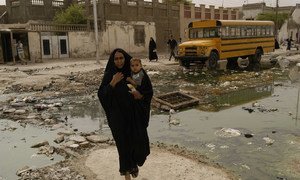 The UN Assistance Mission for Iraq (UNAMI) has strongly condemned the killing of two activists and attacks against others in the southern city of Basra, urging increased efforts to bring the perpetrators to justice.