UNDP India
In India, a woman demonstrates how to use a solar dish for cooking.

India has a crucial role to play in promoting clean energy and climate action as the world looks to recover from the COVID-19 pandemic, UN Secretary-General António Guterres said on Friday.

Delivering the 19th Darbari Seth Memorial Lecture, the UN chief called on India to take the lead in transforming global economic, energy and health systems to save lives, create inclusive economies and avert the threat of climate change.

As governments mobilize trillions of dollars to recover from #COVID19, their decisions will have climate consequences for decades.These choices can either propel #ClimateAction forward, or set us back years.-- @antonioguterres https://t.co/fzFB4qX9ZE pic.twitter.com/Yiiqmq3zUF

“India can become a true global superpower in the fight against climate change, if it speeds up its shift from fossil fuels to renewable energy,” he stated.

With the pandemic putting sustainable development at risk, exposing vulnerabilities that will worsen with climate change, the Secretary-General outlined how switching to clean energy could benefit millions worldwide.

“Investments in renewable energy, clean transport and energy efficiency during the recovery from the pandemic could extend electricity access to 270 million people worldwide – fully a third of the people that currently lack it,” he said.

Furthermore, “these same investments could help create nine million jobs annually over the next three years”, he added.

The number of workers has risen five-fold since 2015, while last year, spending on solar energy eclipsed coal-fired power generation for the first time.

Despite significant challenges, the South Asian giant has embraced the technology that will power a sustainable future, and is a pioneer in areas such as clean cooking.

However, the UN chief noted that subsidies for fossil fuels, such as coal, are still roughly seven times higher  than subsidies  for clean energy. The situation is the same in many other parts of the world, something he found “deeply troubling”.

“I have asked all G20 countries, including India, to invest in a clean, green transition as they recover from the COVID-19 pandemic,” he said. “This means ending fossil fuel subsidies, placing a price on carbon pollution and committing to no new coal power plants after 2020.”

Mr. Guterres said eliminating them would result in a rise in life expectancy by 20 months, and prevent some 5.5 million deaths annually worldwide.

Unlike renewable energy, investing in fossil fuels is “bad economics”, he continued, which explains why the world’s largest investors are abandoning coal.

“They see the writing on the wall,” he said.  “The coal business is going up in smoke.”

The UN chief said he was inspired to learn about a “promising trend” in India.

Mr. Guterres underlined that renewable energy must continue to grow, and coal use progressively phased out.

“Today is the time for bold leadership on clean energy and climate action. I call on India to be at the helm of the ambitious leadership we need,” he said.

The Darbari Seth Memorial Lecture has been delivered annually since 2002, in honour of the late Indian industrialist and founder of The Energy and Resources Institute (TERI), a think tank in New Delhi.

The Secretary-General described Mr. Seth as “a climate action pioneer” who stressed that his country must end its reliance on fossil fuels and instead invest in solar power.

“India has all the ingredients for exerting the leadership at home and abroad envisioned by Darbari Seth,” he said. 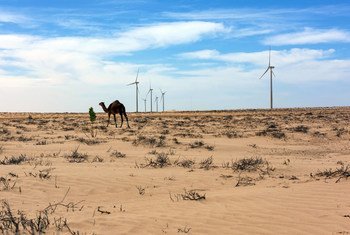