WHO/PAHO
A laboratory technician tests a blood sample to screen for diseases.

The West African nation of Togo has eliminated human African trypanosomiasis or “sleeping sickness” as a public health problem, becoming the first in the continent to achieve the milestone, the UN World Health Organization (WHO) has said.

Sleeping sickness is a neglected tropical disease that is caused by protozoan parasites (single-celled microorganisms) belonging to the genus Trypanosoma. The parasites are transmitted by infected tsetse flies and if untreated the disease is almost always fatal.

“Togo is a pathfinder in eliminating sleeping sickness, a disease which has threatened millions of Africans,” Dr. Matshidiso Moeti, WHO Regional Director for Africa, said on Thursday.

“I congratulate the Government and people of Togo for showing the way. I am sure the country’s efforts will inspire others to push towards a final eradication of sleeping sickness,” she added.

Sleeping sickness is only found in 36 countries in sub-Saharan Africa, in areas where health systems are often weak. The people most exposed to the tsetse fly and to the disease live in rural areas and depend on agriculture, fishing, animal husbandry or hunting.

Over two decades of sustained commitment

Togo’s achievement comes after more than two decades of sustained political commitment, surveillance and screening of cases, according to the UN health agency.

Togo first applied for certification of elimination of sleeping sickness in 2018 and a team of WHO experts studied the data, made recommendations and requested a revision by the country before giving their approval.

National efforts were supported by WHO-led global collaboration that facilitated the donation of medicines and resources from pharmaceutical companies, helped strengthen local capacity and ensured the sustained availability of tools required to control the disease.

In the first stage, the symptoms generally include bouts of fever, headaches, enlarged lymph nodes, joint pains and itching. In the second stage parasites cross the blood-brain barrier to infect the central nervous system, resulting in changes of behaviour, confusion, sensory disturbances and poor coordination. The disturbance of the sleep cycle, which gives the disease its name, is an important feature.

WHO and partners are targeting the elimination as a public health problem of the gambiense form of the disease from all endemic countries by 2030. Benin, Burkina Faso, Cameroon, Cote d’Ivoire and Ghana have started the validation process with the support of WHO.

Wiping out the gambiense form of sleeping sickness will require maintaining the commitment of endemic countries and of donors as well as integrating control and surveillance activities into the regular health systems, said WHO, adding that such efforts need to be supported by improved tools, innovative disease control approaches and effective coordination of efforts. 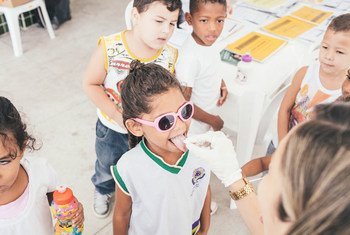