The wild poliovirus has been eradicated in Africa, health officials announced on Tuesday, calling it a “momentous milestone” for the continent.

The independent Africa Regional Certification Commission (ARCC) for Polio Eradication officially declared that the 47 countries in the UN World Health Organization (WHO) African Region are free of the virus, with no cases reported for four years.

Today, the @WHO African Region celebrates the eradication of wild #polio! Reaching every last child with the polio vaccine has meant extraordinary courage, determination & a truly collective effort.

“This is a momentous milestone for Africa. Now future generations of African children can live free of wild polio,” said Dr. Matshidiso Moeti, WHO Regional Director for Africa.

Polio is a viral disease that can cause paralysis, and mainly affects children under five.

The virus is transmitted from person to person, mostly through contact with infected faeces, or less frequently through contaminated water or food. It enters the body through the mouth and multiplies inside the intestines.

While there is no cure for polio, the disease can be prevented through a simple and effective oral vaccine, thus protecting a child for life.

‘A historic day for Africa’

The ARCC certification entailed a decades-long process of documentation and analysis of polio surveillance, immunization and laboratory capacity, as well as field verification visits to each country in the region.

The last case of wild poliovirus in the region was detected in Nigeria in 2016.

A commitment by leaders

The journey to eradication began with a promise made in 1996 by Heads of State during the 32nd session of the Organization of African Unity held in Yaoundé, Cameroon,  where they pledged to stamp out polio, which was paralyzing an estimated 75,000 children annually on the continent.

That same year, the late Nelson Mandela jumpstarted Africa’s commitment to polio eradication by launching the Kick Polio Out of Africa campaign, supported by Rotary International, which mobilized nations to step up efforts to ensure every child received the polio vaccine.

Since then, polio eradication efforts have spared up to 1.8 million children from crippling life-long paralysis, and saved approximately 180,000 lives, WHO reported.

“This historic achievement was only possible thanks to the leadership and commitment of governments, communities, global polio eradication partners and philanthropists,” said Dr. Moeti.

“I pay special tribute to the frontline health workers and vaccinators, some of whom lost their lives, for this noble cause.”

However, Dr. Moeti warned that Africa must remain vigilant against a resurgence of the wild poliovirus.

Keeping vaccination rates up also wards against the continued threat of vaccine-derived polio, or cVDPV2.

WHO explained that while rare, vaccine-derived polioviruses can occur when the weakened live virus in the oral polio vaccine passes among populations with low levels of immunization.  Over time, the virus mutates to a form that can cause paralysis.

WHO officials in Africa believe that the experience in eradicating wild poliovirus has other benefits for health on the continent.

Despite weak health systems, and significant logistical and operational challenges, countries collaborated effectively to achieve the milestone, according to Dr. Pascal Mkanda, Coordinator of WHO Polio Eradication Programme in the region.

“With the innovations and expertise that the polio programme has established, I am confident that we can sustain the gains, post-certification, and eliminate cVDPV2,” he said.

The experience also will inform response to other challenges, both new and ongoing, Dr. Moeti added.

♦ Receive daily updates directly in your inbox - Subscribe here to a topic.
♦ Download the UN News app for your iOS or Android devices.
WHO|polio 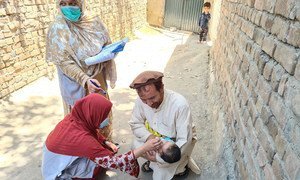 Polio vaccination campaigns have resumed in Afghanistan and Pakistan, months after having been severely disrupted by the COVID-19 pandemic, the UN Children’s Fund (UNICEF) said on Tuesday.