© UNHCR/Sam Tarling
The UN refugee chief, Filippo Grandi, looks at damage caused to the apartment of a Syrian refugee in the aftermath of the explosion at the port in Beirut, Lebanon.

Filippo Grandi, the head of the UN refugee agency, UNHCR, concluded a four-day visit to the country during which he affirmed the agency’s immediate support to over 100,000 Lebanese, refugees and other affected populations.

Terrible stories of loss, wounds and fear in areas of #Beirut   destroyed by the blast. UNHCR contributes to UN efforts by helping people repair and rebuild their homes, overcome trauma, get legal support. All, especially the most vulnerable, must have equal access to aid. pic.twitter.com/KTsMPzI2U4

“The situation is very difficult. Lebanon is enduring multiple challenges - the swirling economic crisis, the COVID-19 pandemic, the impact of the Syrian conflict – and now, this horrible explosion. All of us have a role to play in the response – we cannot let people sleep in the open, without a roof and privacy, exposed to food insecurity, lack of water and medicine,” he said.

UNHCR is mobilizing $35 million for emergency response to the hardest-hit and most vulnerable households in Beirut for the next three months.

The funding will be used in the areas of shelter and protection.

Mr. Grandi was shocked to see the impact of the 4 August blast, which destroyed large areas of Beirut. Nearly 200 people were killed and more than 6,500 were injured, while hundreds of thousands have been left homeless.

The High Commissioner also witnessed the emergency response UNHCR and partners have delivered in one of the devastated neighbourhoods, where they have distributed over 3,140 shelter kits to the worst-affected households, benefiting more than 10,000 people so far.

“It was shocking to see first-hand the scale of the destruction, but it is the human cost of this disaster that is truly heartbreaking,” said.

“The families I met have suffered terrible physical and psychological injuries, but despite everything they remain determined to rebuild their homes and their lives.”

While in Lebanon, Mr. Grandi also assessed his agency’s support to national response to COVID-19.

UNHCR previously allocated $40 million for these efforts, which will be reinforced with an additional $3 million.

The High Commissioner visited Tripoli Governmental Hospital where UNHCR has funded a 43-bed expansion, as well as an isolation centre in Akkar, in northern Lebanon, supported by the agency. The facility is fully equipped to receive people who need to self-isolate but are unable to do so at home.

Overall, UNHCR support to hospitals during the COVID-19 pandemic will cover some 900 additional beds, including in Intensive Care Units (ICU), as well as ventilators and other advanced equipment, and medicine stocks.

Since February, teams have been building dedicated hospital expansion facilities, or rehabilitating existing unused sections and refurbishing them with new medical equipment which will remain the property of the hospitals after the pandemic.

Due to the recent rapid spread of the virus, UNHCR is fast-tracking the deployment of ventilators and other ICU equipment to hospitals across Lebanon.

© UNHCR/Haidar Darwish
UNHCR and its partners are supporting Beirut residents affected by the blast.

Throughout his visit, Mr. Grandi met with refugee families and heard accounts of growing hardship and challenges.

Lebanon, which has a population of around six million, hosts the largest number of refugees per capita in the world. More than one million refugees, mainly Syrians and Palestinians, have found shelter there.

As a result of the deepening economic and financial crisis, and the COVID-19 pandemic, the proportion of refugees living under the extreme poverty line has jumped from 55 per cent to over 75 per cent, according to UNHCR.

“Refugee and Lebanese communities are pushed further down into poverty and vulnerability as a result of the economic crisis, the consequences of the pandemic and now the tragic explosion in Beirut, and need our urgent help today”, Mr. Grandi.

“We are working with humanitarian partners and the donor community to ensure that all people in Lebanon are not forgotten – they need our help now more than ever before.” 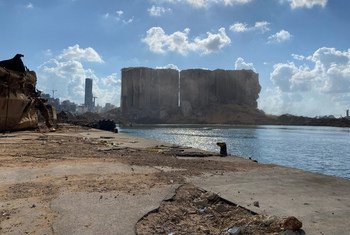 The devastation caused by the Beirut explosions on 4 August has focused attention on the risks involved in the transportation and storage of dangerous goods around the world. The UN is at the forefront of international efforts to reduce these risks and save lives. 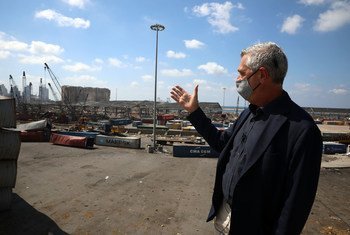