School closures implemented to protect students from COVID-19, are hurting them in other ways, while the long-term impact of this disruption to education could create a “lost generation” in Africa, two UN agencies said on Thursday.

The World Health Organization (WHO) and UNICEF urged governments on the continent to promote a safe return to the classroom while also limiting spread of the virus.

Today @WHOAFRO & @UNICEFAfrica urged African govts to promote the safe re-opening of schools & measures to limit the spread of #COVID19. School closures aimed at keeping children safe from the virus are having serious negative impacts.👉🏿https://t.co/P7IhAwVlLM pic.twitter.com/5dDGMVSeGE

“Schools have paved the way to success for many Africans. They also provide a safe haven for many children in challenging circumstances to develop and thrive,” said Dr Matshidiso Moeti, WHO Regional Director for Africa.

“We must not be blind-sided by our efforts to contain COVID-19 and end up with a lost generation. Just as countries are opening businesses safely, we can reopen schools. This decision must be guided by a thorough risk analysis to ensure the safety of children, teachers and parents and with key measures like physical distancing put in place.”

A WHO survey of 39 sub-Saharan African countries has revealed that schools are open in only six nations and partially open in 19.  Schools are closed in 14 nations, although 12 plan to resume classroom learning in September, the start of the academic year.

The disruption to education has resulted in poor nutrition, stress, increased exposure to violence and exploitation, childhood pregnancies, and overall challenges in the mental development of children.

UNICEF found violence against children has increased in Eastern and Southern Africa.  With 10 million children missing out on school meals, nutrition rates have decreased, with especially high risk among girls, particularly those who have been displaced or from low-income households.

Meanwhile, the World Bank has highlighted the potential long-term social and economic impact of shutdowns in sub-Saharan Africa, which could result in lifetime earning losses of $4,500 per child.

“When we balance the harm being done to children locked out of schools, and if we follow the evidence, it leads children back into the classroom.”

Keeping COVID-19 out of the classroom

WHO, UNICEF and the International Federation of the Red Cross recently issued guidance on COVID-19 prevention and control in schools.

It covers recommendations for physical distancing measures, such as staggering the beginning and end of the school day, spacing desks when possible, and providing handwashing facilities.

“When we balance the harm being done to children locked out of schools, and if we follow the evidence, it leads children back into the classroom.”

While also recommending other important measures, such as regular handwashing and daily cleaning of surfaces, a recent report by the two UN agencies found millions of children attend schools that lack water and sanitation services.

In sub-Saharan Africa, only a quarter of schools have basic hygiene services while less than half have basic sanitation.

The COVID-19 pandemic thus provides an opportunity for investment and innovative thinking to address these shortages, according to the UN agencies.

How can schools open up again safely? The UN has some new guidelines 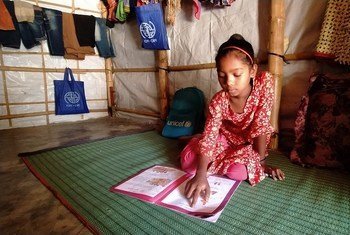 A group of 275 former world leaders, economists and business leaders on Wednesday, urged the G20 group of leading industrialized nations to help stop the pandemic from leaving tens of millions of children from becoming known as the "COVID generation", denied a proper education. 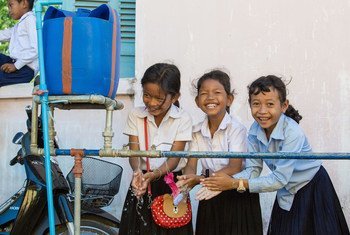 Nearly 820 million children worldwide do not have basic handwashing facilities at school, putting them at increased risk of COVID-19 and other transmittable diseases, according to a report published on Thursday by the World Health Organization (WHO) and the UN Children’s Fund, UNICEF.