Protests broke out overnight in the capital, Minsk, and other cities, ahead of preliminary results announced on Monday, which showed longtime President Alexander Lukashenko had won 80 per cent of the vote, thus securing a sixth term in office.

Thousands were arrested in the protests, which continued for a second night, international media reported on Monday.

Speaking later in the day in New York, UN Spokesman Stéphane Dujarric said the Secretary-General continues to follow the situation “with great concern”.

UN chief António Guterres has urged all relevant parties to avoid actions that would further enflame tensions, and to approach the issues in the spirit of dialogue.

“The Secretary-General calls on the Belarusian authorities to show maximum restraint and to ensure full respect for the rights of freedom of expression, peaceful assembly and association”, Mr Dujarric told journalists.

“He emphasizes the importance of its citizens exercising their rights peacefully in accordance with the law. The Secretary-General urges all relevant actors to avoid actions that would further enflame tensions and to approach the issues in the spirit of dialogue.”

President Lukashenko, 65, has been in power since 1994 and is Europe’s longest-serving leader.

His main challenger, Svetlana Tikhanovskaya, accused the vote of being rigged, and has called on the President to step down, according to media reports.

The 37-year-old teacher and interpreter had no prior political experience before the election. She entered the race in July after her husband, Sergei Tikhanovsky, a popular blogger, was arrested before being able to register as a candidate. 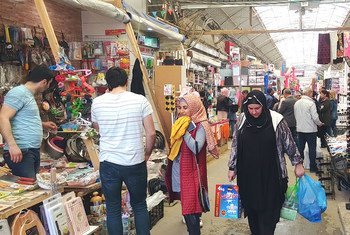