The historic Hagia Sophia in Istanbul, designated a mosque once again earlier this month by the Turkish Government, should be maintained as an inter-cultural space “reflecting the diversity and complexity of Turkey and its history”, said two independent human rights experts on Friday.

The Human Rights Council-appointed experts are urging authorities to preserve the “outstanding universal value” which resulted in the 1,500-year-old basilica, World Heritage Status, according to a press release.

“It would be an historic mistake at this difficult global moment to take actions which divide religious and cultural groups in Turkey and beyond, rather than uniting them”, said Karima Bennoune, Special Rapporteur for cultural rights, and Ahmed Shaheed, Special Rapporteur on freedom of religion or belief. “As someone said, ‘the dome of the Hagia Sophia should be big enough to include everyone’.”

Initially constructed as one of the finest examples of Byzantine Christian architecture in the world, the Hagia Sophia became a mosque for the first time, in 1453 under the Ottoman Empire, and following Turkey’s secularization in the 20th Century, became a museum in 1934.

It would be an historic mistake at this difficult global moment to take actions which divide religious and cultural groups in Turkey and beyond, rather than uniting them - UN  human rights experts

The site has been used by people of all faiths, including Christians and Muslims, and non–religious people, and widely celebrated down the decades, as an example of inter-faith and inter-cultural dialogue.

The experts expressed concern that the Turkish government’s decision on 10 July to change the status of the building, and the “hasty implementation of this decision”, may violate Turkey’s obligations under rules derived from the 1972 UNESCO World Heritage Convention, said the experts.

“We share UNESCO’s concern that the transformation of a site of outstanding universal value requires prior notice and consultation with all stakeholders to ensure that the human rights of all are respected”, they said.  “The Hagia Sophia is Turkey’s most visited attraction, and is a monument of global importance.”

The experts also stressed the importance of appropriate arrangements for the care of the site, following conflicting reports regarding the measures put in place. “We urge the Government of Turkey to clarify the arrangements, and ensure that cultural heritage experts continue to be responsible for the conservation of this monument. International and technical standards must be fully respected”, the independent experts added.

Language referencing conquest used in the debate about the site, has heightened the experts’ concerns, together with the display of a sword, that could be construed as a symbol of conquest, by the head of the State Religious Affairs Agency during a high-level prayer service to mark the site’s change in status, last Friday, said the UN experts – an event that was also attended by Turkish President, Recep Tayyip Erdogan.

“In light of such developments, the experts fear that the change of status of the Hagia Sophia to a monolithic site could reflect a supremacist view of history”, said the press release, raising up a single cultural narrative, “rather than the meeting of cultures - the spirit which resulted in its World Heritage status - and could prevent access to the site on an equal footing for people of all faiths”, and none.

“We are gravely concerned about the rights of everyone to access and enjoy cultural heritage, about inter-faith co-existence and secular spaces, and about the equality and safety of religious minorities, including Christians”, the experts said.

Likewise, they called for tolerance overall, in the hope that opposition to the mosque designation elsewhere in the world, will reflect universal values and non-discrimination, rather than offering a competing monolithic vision which fosters hatred against Muslims.  “It is essential to refrain from instrumentalizing cultural heritage and instead to engage with heritage in its diversity in such a way as to allow cultural rights to flourish for all.”

“We encourage the Turkish Government to engage in dialogue with all stakeholders.  This is essential to guarantee that the Hagia Sophia continues to be a space for the enjoyment of cultural rights by all, reflecting its diverse Christian, Muslim and secular heritages, and that it continues to be a symbol which brings all people in Turkey together”, said the experts.

Special Rapporteurs are not UN staff and do not receive a salary for their work. They are independent from any government or organization, and serve the UN human rights system, in their individual capacity. 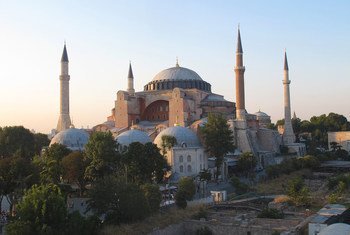 As the Turkish President signed a decree on Friday converting the ancient Hagia Sophia in Istanbul into a mosque, the UN cultural agency (UNESCO) said that it "deeply regrets the decision" made "without prior discussion", having earlier in the day called on the State to abide by its “legal commitments and obligations” in accordance with it’s status as a museum, on the World Heritage List. 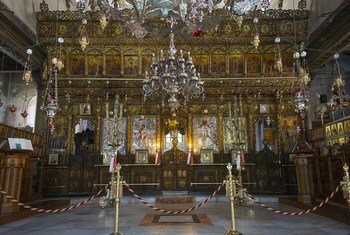 The United Nations’ cultural agency announced on Tuesday that it was removing the place that is officially recognized as the Birthplace of Jesus, from its List of World Heritage in Danger – crediting extensive restorative work on Bethlehem’s Nativity Church, in Palestine.