“For too long, the harrowing abuses experienced by refugees and migrants along these overland routes have remained largely invisible.”~ @FilippoGrandi on latest report of the harrowing journey to Africa's Mediterranean coast https://t.co/vAKlbxKBAH pic.twitter.com/RzrMdu3ji3

Other people on the move said they had been burnt with hot oil and melted plastic, while others faced electrocution and being tied in stress positions.

Smugglers and traffickers were key abusers, but so too were State officials, to a surprising extent, Vincent Cochetel, UNHCR Special Envoy for the Central Mediterranean, told journalists at the UN in Geneva.

Although accurate data is extremely difficult to gather, data suggests that at least 1,750 people died leaving western or eastern African nations en route to countries including Libya, Egypt or Algeria in 2018 and 2019.

70-plus deaths each month

This represents more than 70 deaths a month, “making it one of the most deadly routes for refugees and migrants in the world”, UNHCR said in a statement.

Almost three in 10 people died as people attempted to cross the Sahara Desert, according to the UN agency. Other lethal hotspots included locations in southern Libya such as Sabha, Kufra and Qatrun, in addition to the “smuggling hub” of Bani Walid southeast of Tripoli and several places along the west African section of the migrant route, including Bamako in Mali and Agadez in Niger.

To date this year, at least 70 people are known to have died, including 30 killed in June by traffickers in Mizdah, southern Libya, whose victims came from Bangladesh and African countries.

In a note accompanying the report, UNHCR noted that overland deaths are in addition to the “thousands who have died or gone missing” in recent years trying to cross the Mediterranean to Europe, usually in vessels unfit to make the crossing.

More than 70 per cent perish on land

“We can consider that an estimate of 72 per cent minimum died overland even before reaching Libya or Morocco or Egypt, their place of initial destination on their journey,” Mr. Cochetel said. “That’s a low estimate in our view, in the sense that the number of deaths on land is more or less the same than the number of deaths at sea for 2018/2019.”

Among the report’s findings is clear evidence that Libya is by no means the only place where migrants and refugees face life-threatening dangers.

“Abuse actually is along the route and even sometimes it starts within the country of origin and follows people as they move”, said Othman Belbeisi, IOM Senior Regional Advisor to the Director General on Middle East and North Africa.

“Especially as they are moving at the hands of those smugglers and traffickers. People do not know their locations and they do not have communications, so even if people die or go missing, it’s very difficult to verify or to know where those people get missed.”

Describing the report’s findings as “unacceptable” and calling for action to help vulnerable people on the move, Mr. Cochetel noted that internationally agreed measures to target business and individuals involved in people smuggling had shown limited success.

“We have had no new names of traffickers listed for the last two years, we have not had one single arrest of a UN-sanctioned trafficker over the last two years”, he said. “So why can’t States do like they do with trafficking of weapons, terrorism or drug trafficking; why don’t we follow the money-flows, why don’t we seriously go after those people and try to combat impunity.”

Most stay in first country of arrival

Around 85 per cent of refugees usually stay in the first country where they arrive, the UNHCR Special Envoy insisted, before underscoring the need for investment in countries of origin, to provide desperate people with an alternative to having to put their lives in the hands of traffickers.

“Access to education is difficult, socio-economic inclusion is inexistent in many countries,” Mr. Cochetel said. “Access to medical care is not available, we’ve seen it during COVID-19 in many of those transit countries for migrants or for refugees, so there is a lot to be done under this umbrella of inclusion.”

Highlighting the fact that Libya is not safe for refugees and migrants returned from dangerous sea crossing attempts by the Libyan coast guard, IOM’s Othman Belbeisi called for solutions beyond the war-ravaged nation.

“The situation is not only in one country, (the) other side of the Mediterranean has also a big responsibility”, he said. 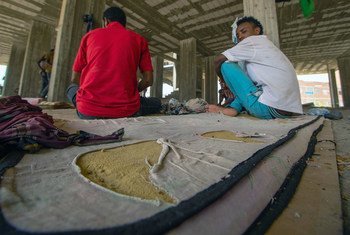 Tens of thousands of Ethiopian migrants have been stranded in war-ravaged Yemen where they continue to be subjected to arbitrary detention and exposure to COVID-19 infection, forcible relocation and abuse, UN humanitarians said on Tuesday. 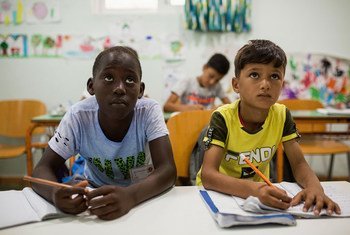 Global advocates for refugees are pushing to ensure the COVID-19 pandemic does not derail efforts for displaced children and young people to continue learning and eventually return to a real classroom.