© UNICEF/Fauzan Ijazah
A mother and her two-year old daughter at home in Central Java, Indonesia.

Tackling inequality, bridging the digital divide, greening the economy, and upholding human rights and good governance will be critical for Southeast Asia to recover from the COVID-19 pandemic, the UN Secretary-General said on Thursday.

António Guterres has released his latest policy brief on the crisis, which examines impacts on the 11 countries in the subregion and recommendations for the way forward that put gender equality at the centre of response efforts.

Thanks to swift &amp; decisive action, Southeast Asia has been spared some of the suffering &amp; upheaval seen elsewhere due to #COVID19.The @UN remains committed to supporting the region's efforts to achieve the #GlobalGoals &amp; build a peaceful future for all. https://t.co/xvZCKWtlkY pic.twitter.com/gfD6ueFrjT

“As in other parts of the world, the health, economic and political impact of COVID-19 has been significant across Southeast Asia - hitting the most vulnerable the hardest”, he said in a video accompanying the launch.

Prior to the pandemic, countries were lagging behind in achieving the Sustainable Development Goals (SDGs) by the 2030 deadline.

Despite strong economic growth, the policy brief reveals that the subregion was beset by numerous challenges including high inequality, low social protection, a large informal sector, and a regression in peace, justice and robust institutions.

“The pandemic has highlighted deep inequalities, shortfalls in governance and the imperative for a sustainable development pathway. And it has revealed new challenges, including to peace and security”, the Secretary-General said.

The current situation is leading to recession and social tensions, while several long-running conflicts have stagnated due to stalled political processes.

“All governments in the subregion have supported my appeal for a global ceasefire - and I count on all countries in Southeast Asia to translate that commitment into meaningful change on the ground”, he added.

The new coronavirus that causes COVID-19 first emerged in Wuhan, China, in late 2019, and the pandemic was declared in March. Globally, there have been more than 16.5 million cases, with nearly 657,000 deaths, the World Health Organization (WHO) reported on Wednesday.

While the disease arrived in Southeast Asia earlier than in the rest of the globe, the UN chief commended governments for acting swiftly to battle the pandemic.

On average, they took 17 days to declare a state of emergency or lockdown after 50 cases of COVID-19 were confirmed, according to the policy brief.

The Secretary-General underlined four areas that will be critical to ensuring recovery from the pandemic leads to a more sustainable, resilient and inclusive future for Southeast Asia.

Mr. Guterres also advised countries to bridge the digital divide so that no one is left behind in an ever-more-connected world.

ILO/Marcel Crozet
Factory workers in an assembly line in Cambodia.

Due to the over dependence on coal and other industries of the past, he encouraged “greening” the economy, including to create future jobs.

Upholding human rights, protecting civic space and promoting transparency are all intrinsic to an effective response, he concluded.

“Central to these efforts is the need to advance gender equality, address upsurges in gender-based violence, and target women in all aspects of economic recovery and stimulus plans,” the UN chief said.

“This will mitigate the disproportionate impacts of the pandemic on women, and is also one of the surest avenues to sustainable, rapid, and inclusive recovery for all.”

Though the challenge is formidable, the Secretary-General underlined the UN’s strong commitment to helping Southeast Asian countries achieve the SDGs and a peaceful future for all. 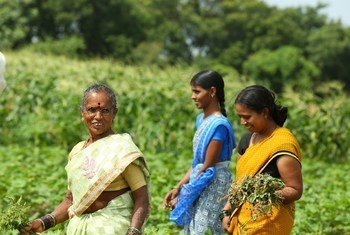 Although hundreds of millions of smallholder family farmers in Asia-Pacific produce a majority of the world’s food, the COVID-19 pandemic is having a disproportionate impact on their livelihoods, according to the Food and Agriculture Organization (FAO). 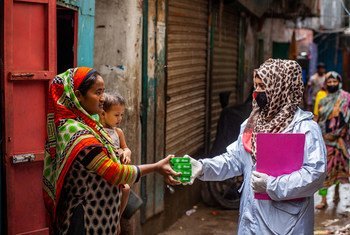