© UNHCR/Socrates Baltagiannis
Two refugee boys in a classroom at a reception centre in Kos, Greece.
13 July 2020
Migrants and Refugees

Global advocates for refugees are pushing to ensure the COVID-19 pandemic does not derail efforts for displaced children and young people to continue learning and eventually return to a real classroom.

During a roundtable discussion held online on Monday, top UN officials, education ministers, and young refugees, together with representatives from the private sector and non-governmental organizations, highlighted growing needs on the ground - during the crisis and beyond.

Millions of refugee children & youth had their education interrupted due to #COVID19 school closures.

We must act now to address the inequality & dire situation they face.

Raise your voice & stand #WithRefugees to ensure their #LearningNeverStops!https://t.co/QhHS113ifY pic.twitter.com/IRDK7S4Nzr

“Even before COVID-19, refugee children were twice as unlikely as other children to attend school”, said Audrey Azoulay, Director-General of the UN’s educational and cultural agency, UNESCO, which co-organized the event alongside the UN refugee agency, UNHCR.

“Four million of these children, aged between five and 17, did not attend primary or secondary education, and only one per cent embarked on higher education, severely limiting their chances for the future.”

One billion out of school

Although some countries are slowly emerging from the pandemic, with an increasing trend towards re-opening schools, more than one billion students worldwide are still out of the classroom, according to UN estimates.

COVID-19 has upended lives and societies but its impacts have been harshest for the world’s most vulnerable people, such as the nearly 80 million refugees who have been forced to flee their homelands.

Despite improved enrollment rates, only 63 per cent of refugee children are receiving primary or secondary education.

“COVID-19 is proving to be an incredible catalyst for science, and discovery and innovation”, she stated.

“And if we could do the same for education—harnessing new technologies with the power of government and private sector funding, and the energy and the drive of millions of talented young people—it would be one of the greatest single inoculations imaginable against poverty and the denial of rights worldwide.”

The partners fear the pandemic could increase inequities, whether due to existing barriers, such as those hindering girls’ access to education, or from rising racism, discrimination and xenophobia brought on by the crisis.

“Instead of benefiting from school feeding programmes, 370 million children are facing food insecurity”, she told the meeting. “Instead of experiencing a safe environment at school, children and youth are more vulnerable to sexual and gender-based violence and abuse at home. This reality is further compounded for refugees and internally displaced persons. These children are missing out not only on education and meals at school, but also a safe place to grow up and thrive.”

Both Canada and the United Kingdom, co-hosts of the online discussion, announced $5 million pledges to support young refugees as well as their teachers, who also serve as sources of psycho-social support.

“If we are truly to build back better, which we all want to do, education must be prioritized in the global recovery from coronavirus”, said Baroness Sugg, UK Special Envoy for Girls’ Education.

Young refugees on the frontlines

Bahati Ernestine Hategekimana is a living example of the powerful influence education can have on the life of a young refugee.

She and her family arrived in Kenya from Rwanda in 1996. Today, Bahati is on the frontlines of the COVID-19 response effort, as a nursing intern in the capital Nairobi. She also participates in an online campaign that showcases refugee contributions to counter the crisis.

“All over the world, young refugees volunteer like me to support the emergency response. We have communication officers who fight against fake news, students who raise funds to support vulnerable families: from refugees as well as host communities; and others who have produced masks and soap and distributed them among communities”, she said.

Bahati was able to pursue her dream of becoming a nurse when she was awarded a scholarship through a UNHCR programme that supports higher education opportunities for refugees.

She said most recipients are studying in the health care field, meaning they can help strengthen health systems in their host countries and in their countries of origin.

♦ Receive daily updates directly in your inbox - Subscribe here to a topic.
♦ Download the UN News app for your iOS or Android devices.
UNESCO|UNHCHR|education|COVID-19|coronavirus 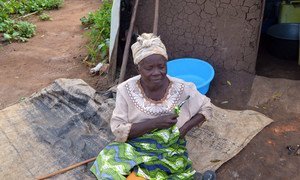 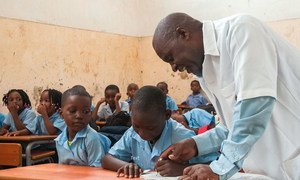 Inclusive education should be a “non-negotiable” right for all children, the head of the UN Educational, Scientific and Cultural Organization (UNESCO) said in a new report launched on Tuesday.