More than 50 Heads of State and government, alongside global employers’ and trade union leaders, have been taking part in an online discussion on Wednesday looking at the impact of the COVID-19 pandemic on the world of work.

The Global Summit is part of a five-day virtual event organized this month by the International Labour Organization (ILO), to examine issues that include countering the economic and social impact of the crisis.

"This pandemic has shown everyone the real meaning of work. Today, we must strengthen our commitment to work together to recover quickly from the crisis," @GuyRyder, @ilo DG on Global Leaders' Day.#ILOSummit pic.twitter.com/VZCaymzavX

In a video message, UN Secretary-General António Guterres told leaders that they are essential to global efforts to “build back better” after the pandemic.

“Together, we can emerge from this crisis stronger, with decent jobs and a brighter, more equal and greener future for all”, he said.

The COVID-19 pandemic has exposed the extreme vulnerability of millions of workers and businesses worldwide.

It has led to a 14 per cent drop globally in working hours during the second quarter of this year: equivalent to the loss of 400 million full time jobs, according to data from the ILO.

Furthermore, most of the world’s workers - a staggering 93 per cent - continue to live in countries that have implemented some form of workplace closures.

As of Wednesday, the World Health Organization (WHO) reported more than 11.6 million confirmed cases of COVID-19 worldwide, and nearly 540,000 deaths.

The UN chief pointed out that while some countries are just entering the worst days of the pandemic, others are struggling to open up their economies amid the threat of a resurgence in cases.

“But let’s be clear: it’s not a choice between health or jobs and the economy”, he said. “They are interlinked. We will either win on all fronts or fail on all fronts.”

He underscored the importance of global solidarity as no country can solve the crisis alone.

“This Global Summit is an opportunity for governments, workers and employers’ representatives to shape winning responses”, he said.

“Responses that stimulate the economy and employment. Solutions that support enterprises, decent jobs and incomes. Approaches that safeguard workers and expand social protection. Plans that promote gender equality and reinforce social cohesion. Proposals that protect the most vulnerable and invest in essential workers — such as those in health and care services — who are on the frontlines of the response. And above all, initiatives that are grounded in unity and solidarity.”

A better world of work

Leaders addressed the summit via video messages, outlining how their countries or organizations are responding to the crisis.

“I've no doubt that these messages will provide us with invaluable guidance and encouragement in our efforts to overcome the pandemic and to address effectively and urgently, its impact on the world of work,” said ILO Director General Guy Ryder in delivering the opening remarks.

The Global Summit was preceded by five regional virtual events held last week looking at the challenges of recovery and building a better future of work after the pandemic.

Over two days, government, employer and worker representatives and academia from across five regions of the world – Africa, the Americas, the Arab States, Asia-Pacific and Europe – discussed the huge costs of the COVID-19 pandemic to their economies, labour markets and societies.

Their exchanges helped inform the Summit, which the ILO said is the largest-ever online gathering of its kind.

♦ Receive daily updates directly in your inbox - Subscribe here to a topic.
♦ Download the UN News app for your iOS or Android devices.
ILO|COVID-19|coronavirus 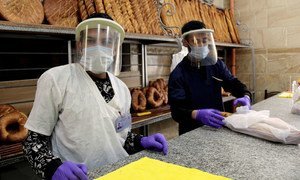 The impact of the COVID-19 crisis on jobs has been much worse than expected initially, the head of the UN labour agency said on Tuesday, in an appeal to Governments, workers and employers, to agree on a sustainable economic recovery plan to reduce inequalities laid bare by the pandemic.