FAO
The Food and Agriculture Organization (FAO) and China’s Tsinghua University built an innovative lab to experiment on new methods to reduce poverty.

More than 70 million people are expected to fall into extreme poverty because of COVID-19, the UN Human Rights Council heard on Tuesday, as a leading rights expert slammed “greatly exaggerated” claims of global poverty eradication between 1990 and 2015.

But this includes the 750 million people in China living below the poverty line in 1990, who numbered just 10 million in 2015, the Special Rapporteur explained, before questioning the “very weak, unsatisfactory” World Bank measure of poverty.

“Leaving out China, the number of people living below the $2.50 USD per day would barely have changed throughout this period, and it would have increased by 140 million people in Sub-Saharan African and the Middle East”, Mr. de Schutter said.

Highlighting calls to adopt a much more realistic measure of poverty than the IPL baseline amount, the Special Rapporteur noted that it could be based on meeting people’s basic needs – and particularly children’s - which the Council heard were twice as likely as adults to be living in poverty.
“If you speak to people in poverty and ask them about their experience of poverty, they will tell you about the anguish, the stress, the disempowerment, the discrimination and the social and institutional abuse”, he said, before urging Member States to focus less on economic growth as a means to reduce poverty, and more on the reduction of inequalities and the redistribution of wealth.

Turning to his predecessor’s report, he noted that “in the name of achieving growth, we have lowered corporate tax rates (from an average of 40 per cent in 1980 to 24 per cent in 2019)”.

In addition, States “have tolerated aggressive practices of tax avoidance by transnational corporations” which had cost States $650 billion per year, the Special Rapporteur’s findings suggested, in addition to deregulating labour markets and privatising public services, which had led to an increase in the cost to users.

© UNICEF/Popov
Roma children and adults in Bulgaria (file photo)
♦ Receive daily updates directly in your inbox - Subscribe here to a topic.
♦ Download the UN News app for your iOS or Android devices. 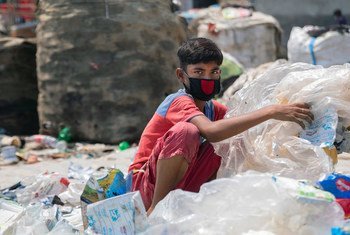 Addressing poverty eradication on Tuesday in front of the General Assembly, UN chief António Guterres warned that the impacts of the COVID-19 pandemic are falling “disproportionately on the most vulnerable: people living in poverty, the working poor, women and children, persons with disabilities, and other marginalized groups”.