The UN human rights office, OHCHR, has expressed alarm at the arrest of demonstrators in Hong Kong, following China’s adoption of a national security law for the Special Administrative Region (SAR).

Spokesperson Rupert Colville told journalists in Geneva on Friday that the Office of the High Commissioner for Human Rights was continuing to analyze the new law after it came into force on Wednesday, regarding its compliance with international human rights obligations:

#HongKongSecurityLaw: We are alarmed that arrests are already being made under the new law. Definition of the offences are vague and overly broad, which may lead to discriminatory or arbitrary interpretation and enforcement.Learn more: https://t.co/h6efieMrfr pic.twitter.com/optBeO09HW

He added that colleagues are “very much actively counting, trying to get those kinds of details and we’ll see what kind of concerns we have about individual cases.”

Mr. Colville pointed to “vague and overly broad” definitions of some offences in the new law that had been adopted by China's National People's Congress.

“This may lead to discriminatory or arbitrary interpretation and enforcement of the law, which could undermine human rights protection,” he explained.

Reiterating concerns about restrictions on freedom of expression highlighted by High Commissioner Michelle Bachelet, the OHCHR official insisted that such laws “should never be used to criminalize conduct and expression that is protected under international human rights law”.

Offences created under the new national security legislation should comply with the principle of legality, which is enshrined in article 15.1 of the International Covenant on Civil and Political Rights, Mr. Colville added.

The development follows a joint declaration by dozens of UN-appointed independent rights experts alleging the repression of “fundamental freedoms” of Hong Kong protesters.

Citing the alleged use of chemical agents against demonstrators, the experts also alleged sexual harassment and assault of women protesters in police stations; together with the alleged harassment of health care workers.

The law had been drafted without meaningful consultation with the people of Hong Kong, they continued, adding that it risked undermining the right to a fair trial and could prompt a “sharp rise in arbitrary detention”.

The independent experts are neither UN staff nor paid by the Organization.

The “one country, two systems” governance framework that was introduced at the end of British rule also risked being undermined, the experts insisted, enabling the Chinese Government to establish “agencies” in Hong Kong “when needed”.

Provisions governing the offence of “collusion with a foreign country or with external elements to endanger national security” contained in article 29 of the new law were also concerning, the OHCHR spokesperson added.

“This may lead to a restriction of civic space and of the possibility for civil society actors to exercise their right to participate in public affairs,” he said.

“These provisions could also lead to criminalizing human rights defenders and activists for the exercise of their right to freedom of expression, association and peaceful assembly.” 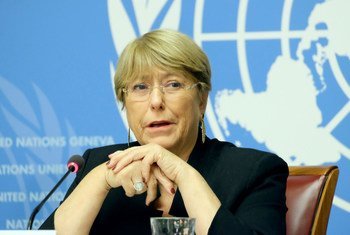