Unsplash/Ian Usher
A drone flies over Mount Tamalpais in the United States.

Amid global protests against systemic racism, corruption and economic woes exacerbated by the COVID-19 crisis, High Commissioner for Human Rights Michelle Bachelet also expressed concern about the use of non-lethal weapons against demonstrators.

There should be a moratorium on the use of #FacialRecognition technology in the context of peaceful protests, until States meet certain conditions including transparency, oversight and #HumanRights due diligence before deploying it.Learn more: https://t.co/GJoyRqkT5t pic.twitter.com/pUiEyKV7He

The High Commissioner urged States and businesses to ensure that these and other fast-developing technologies are developed and used in ways that do not disrupt and prevent people’s participation in public affairs.

“New technologies can be used to mobilize and organize peaceful protests, form networks and coalitions…thus driving social change”, Ms. Bachelet said, a former two-term president of her native Chile. “But, as we have seen, they can be – and are being – used to restrict and infringe on protesters’ rights, to surveil and track them, and invade their privacy.”

In a call for mandatory training for law-enforcement personnel on the use of crowd control weapons - and accountability for rights violations related to their misuse - the High Commissioner explained that they “can kill if …improperly used, whether deliberately or accidentally”.

According to OHCHR protests took place in some 80 countries around the world in 2019, with many grievances at the core of the 2030 Agenda for Sustainable Development.

This year, people in thousands of cities worldwide took to the streets in the wake of the death in the U.S. of George Floyd, whose death on 25 May in Minneapolis was captured on video, while a police officer knelt on his neck for over eight minutes.

This was despite the fact that the technology was allegedly “prone to errors”, she continued, urging its proportionate use.

“That means in this context that misidentification could lead to wrongful arrest for example, or prosecution. These risks we know are substantially greater for women and people of colour, raising the likelihood that facial recognition technology may perpetuate and amplify discrimination.”

It was also deeply concerning that protesters faced having their cell phone calls intercepted or blocked by “many” police forces, or their social media accounts hacked and systematically monitored.

“Too often authorities have viewed peaceful assemblies as something that needs to be controlled or managed, rather than as critical vehicles for public participation in democracy”, Ms. Hicks told journalists via video conference in Geneva.

Among its recommendations, the OHCHR report urged States to avoid resorting to internet shutdowns, which happened during at least 65 protests in 2019.

Addressing the fact that only around half of the world’s people have access to the internet today, Ms. Bachelet also insisted that it was “crucial” that States ensure secure and affordable online access for everyone.

“Given the importance of the enjoyment of the right of peaceful assembly for democracies, and the role Internet-based technologies can play, it is crucial that States close the digital divide and ensure the greatest number of people possible can get secure, affordable Internet access”, the High Commissioner said. 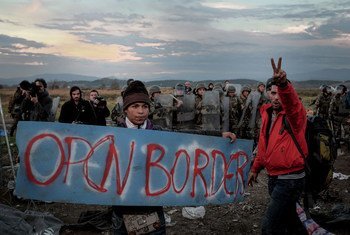 9 March 2016
A new report presented today to the United Nations Human Rights Council offers recommendations on proper preparations and precautions to protect the rights of the demonstrators, bystanders and police during public gatherings.