UN Photo/Eskinder Debebe
A delegate votes in elections for the UN Economic and Social Council (ECOSOC).

Turkish diplomat Volkan Bozkir was elected President of the forthcoming session of the UN General Assembly in a vote held on Wednesday that was emblematic of its time.

Wearing facemasks and practicing physical distancing, ambassadors from 192 UN Member States filed into the iconic but empty General Assembly Hall to cast their ballots during pre-determined time slots: an added layer of protection in the COVID-19 era.

In a one-of-a-kind election amid #COVID19, #UNGA elects @IndiaUNNewYork, @MexOnu, @irishmissionun, &amp; @NorwayUN as non-permanent members of the Security Council for 2-year terms. A second round of voting will be held Thursday to fill the last vacant seat. https://t.co/svznemQth6 pic.twitter.com/HCzomD18Yb

“Since the onset of the COVID-19 pandemic, we have all had to work under extraordinary conditions to overcome the myriad of challenges facing us,” the current General Assembly President, Tijjani Muhammad-Bande, said ahead of the elections.

Mr. Bozkir, a veteran diplomat and parliamentarian, will preside over the landmark 75th session of the UN General Assembly, which opens in September. He was the sole candidate for the post.

While three countries vied for two seats allocated to African and Asia-Pacific States, only India was confirmed. Djibouti and Kenya face a second round of voting to be held on Thursday.

A similar race occurred for the Western European and other States group, where Canada did not secure the required two-thirds majority, or 128 votes.

Norway and Ireland will begin their terms starting in January, as will Mexico, representative for the Latin America and Caribbean region.

Eighteen countries will also occupy vacant seats in the Economic and Social Council, another of the six main organs of the UN.

While this year’s General Assembly falls during the UN’s 75th anniversary, the pandemic adds to its historic significance, and the need to maintain safety measures.

Plans are in motion for the annual high-level week, where Heads of State address the world from the dais in the General Assembly Hall.

Mr. Muhammad-Bande, the current President, has written to Member States about a scenario that foresees his successor and UN Secretary-General António Guterres present in the Hall for the official opening, while world leaders will deliver their speeches via pre-recorded video statements.

Delegations have until noon on Friday to submit their feedback.

UN Photo/Eskinder Debebe
Elections for the President of the UN General Assembly, the Economic and Social Council and the Security Council have been taking place at UN Headquarters in New York.
♦ Receive daily updates directly in your inbox - Subscribe here to a topic.
♦ Download the UN News app for your iOS or Android devices.

Welcoming early results on use of dexamethasone in sickest COVID-19 patients, WHO warns it’s ‘no cure-all’ 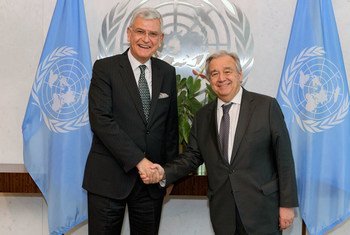 The COVID-19 pandemic has highlighted the ‘crucial role’ of the UN and its agencies, according to the veteran Turkish diplomat and parliamentarian who, as the only candidate for the top job, is slated to lead the historic 75th session of the General Assembly which begins in September. 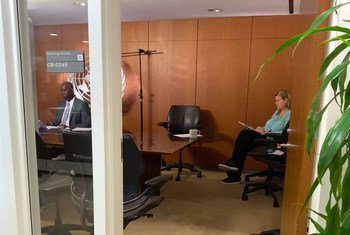 Although it seems the whole world is on lockdown as countries follow health guidelines to curb the spread of COVID-19, the global “town hall” at UN Headquarters in New York remains open for business, albeit with a technical twist.