© UNICEF/Tanya Bindra
A young girl cooks in a rural village in Ethiopia, where the land has been affected by recurrent droughts.

The UN Secretary-General has called for “a new contract for nature” to address ongoing global challenges connected to land degradation, such as forced migration, hunger and climate change.

António Guterres made the appeal on Wednesday in a message to mark the World Day to Combat Desertification and Drought.

“Through international action and solidarity, we can scale up land restoration and nature-based solutions for climate action and the benefit of future generations. By doing so, we can deliver on the Sustainable Development Goals and leave no one behind”, he said.

Desertification, or the degradation of land in arid areas, is caused primarily by human activities and climatic variations, with more than three billion people routinely affected.

Drylands cover more than a third of the planet’s land surface. They are extremely vulnerable to overexploitation and inappropriate land use, such as through overgrazing or bad irrigation practices.

This year’s observation puts the spotlight on sustainable production and consumption.

With ‘Food. Feed. Fibre’ as the slogan, the aim is to get people everywhere to reduce food waste, shop at local markets, and swap clothes instead of always buying new items.

The head of the UN office which oversees a global treaty on preventing land degradation said that although the COVID-19 pandemic may have temporarily curtailed some freedoms, such as travelling at will, people still have freedom of choice.

“In our globalized world, the food we eat, the feed for our livestock and the fibre for clothes, impact land thousands of miles away,” said Ibrahim Thiaw, Executive Secretary at the UN Convention to Combat Desertification.

“Each of us holds the power to protect the land for each choice we make in our daily lives. And we can still choose to protect nature. By doing so, we in fact protect our future.”

The Secretary-General pointed to efforts to reverse land degradation, such as the Great Green Wall in Africa’s Sahel region, launched by the African Union in 2007.

Through the initiative, trees are being planted from Senegal to Djibouti, to restore land and boost food security, transforming lives and livelihoods along the way.

“Such efforts bring back biodiversity, reduce the effects of climate change and make communities more resilient,” the UN chief said. “All told, the benefits outweigh the costs ten-fold.”

Globally, 75 per cent of land is degraded, according to the President of the UN General Assembly, Tijjani Muhammad-Bande.

“As land degrades, resources deplete. Thus, the most vulnerable people are further exposed to poverty and hunger; with women, smallholder farmers, indigenous communities and children being disproportionately affected”, he said.

The resulting extreme poverty and hunger are among the root causes of both conflict and migration, he continued, outlining a cycle of “degrade-abandon-migrate”.

Mr. Muhammad-Bande believes an “urgent paradigm shift” is needed, focusing on protection, sustainability and restoration, and he called for renewed commitment to safeguarding the planet.

“As we build back better in the wake of the COVID-19 pandemic, let us work together with farmers to promote sustainable land management”, he said.

“We must support smallholder farmers, the vast number of whom are women, to make evidence-based decisions in regard to crop selection, inputs usage, and land resilience, in the face of climate change and loss of biodiversity.”

Welcoming early results on use of dexamethasone in sickest COVID-19 patients, WHO warns it’s ‘no cure-all’ 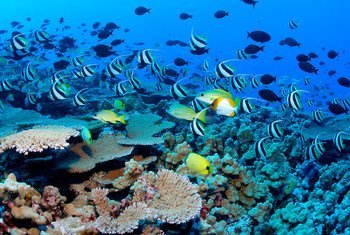 Recovery from the COVID-19 pandemic must also lead to countries uniting to preserve the natural world, in line with global commitments to achieve a better future for all people and the planet, top officials with the United Nations said on Friday, the International Day for Biological Diversity.