UNESCO
A screenshot of Maria Ressa during a UNESCO online dialogue on press freedom. (May 4, 2020)
16 June 2020
Human Rights

The conviction of prominent Filipino journalist Maria Ressa has been described by an independent UN expert as “a new low in the Philippines’ protection of the freedom of expression” and “the ability of an independent media to function in the country”.

Ms. Ressa, one of a group of journalists named as Time Magazine’s person of the year in 2018, was found guilty of “cyber-libel” on Monday, in relation to a story published on Rappler, the news website that she edits.

The story, which alleged links between a businessman and a senior judge, was written by Rappler journalist Reynaldo Santos, who was also convicted. Mr. Santos and Ms. Ressa now face prison time of up to six years.

The expert, David Kaye, whose official title is UN Special Rapporteur on the right to freedom of opinion and expression, said in his statement that the higher courts in the Philippines have a responsibility to reverse the verdict against Ms. Ressa, and that “the law used to convict Ms. Ressa, and the journalist who authored the article which led to their prosecution, is plainly inconsistent with the Philippines’ obligations under international law”.

Mr. Kaye declared that the conviction of Ms. Ressa should be seen as a reflection of government attacks on both her, her journalism, and Rappler, that stretch back years, and called for reform of the country’s defamation laws, including the “Cybercrime Prevention Act which, he said, “fails to recognise this fundamental principle of contemporary human rights law”.

The expert warned that “any criminalisation of journalism, as took place here, serves only to defeat the ability of journalists to inform the public, to ensure open and rigorous public debate”.

Earlier this month, the UN human rights chief, Michelle Bachelet, warned that the Philippines, alongside several other Asian countries, has seen an alarming clampdown on freedom of expression during the COVID-19 crisis.

Ms. Bachelet appealed to authorities on 3 June, calling for action taken to stop the spread of false information, to adhere to the principles of legality, necessity, proportionality.

The High Commissioner detailed how people have been fined, arrested or attacked for allegedly spreading misinformation online about COVID-19, or for criticizing their Government’s response.

♦ Receive daily updates directly in your inbox - Subscribe here to a topic.
♦ Download the UN News app for your iOS or Android devices.
philippines|press freedom 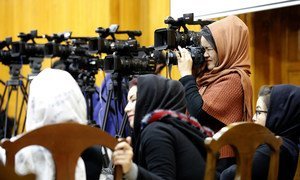