© Sarah Scaffidi
Protesters in McCarren Park in Brooklyn observe 20 minutes of silence for those who have died from racist actions.
15 June 2020
Human Rights

Opening the 35th meeting of the 43rd session of the Council in the unusual setting of the Assembly Hall, to comply with social distancing requirements, current Council President, Elisabeth Tichy-Fisslberger, gave the floor to Burkina Faso, coordinator of the African Group.

“The tragic events of 25 May in Minneapolis in the US which led to the death of George Floyd led to protests throughout the world against injustice and police brutality that persons of African descent face on a daily basis in many regions of the world”, said Dieudonné W. Désiré Sougouri, Permanent Representative of Burkina Faso to the United Nations Office and other international organizations in Geneva. “The death of George Floyd is unfortunately not an isolated incident.”

Insisting that many other persons of African descent had “faced the same fate because of their origin and police violence”, Mr. Sougouri said that it would be “inconceivable” if the Council did not address the issue.

“This is why the African Group calls upon the Human Rights Council to organise an Urgent Debate on current violations of human rights that are based on racism, systemic racism, police brutality against persons of African descent and violence against peaceful demonstrations to call for an end to be put to these injustices”, he said.

After the request was endorsed, Ambassador Tichy-Fisslberger fixed the provisional date of the Urgent Debate on “current racially inspired human rights violations, systematic racism, police brutality and the violence against peaceful protests” for Wednesday 17 June at 3pm.

#HRC43 is resuming 15-19 June 2020 @UNGeneva after its suspension due to #COVID19. Safety measures have been put in place at Palais des Nations to ensure the well-being of all participants.
📺Follow it live on https://t.co/v45v8mL0yq
👉https://t.co/kh8S72DFOU#HumanRights pic.twitter.com/N7RutwjH8W

‘Tragedy’ of racism and police violence

Speaking later to journalists, the Council President confirmed that the request from the African Group came after “what happened in America with George Floyd and the whole tragedy which showed the problems of racism, of police violence and the follow-up to that”.

It was not clear whether any members of Mr. Floyd’s family had been invited to address the Council, but a draft resolution would be prepared by the Group, she added.

The group’s initiative came after a call from more than 600 rights groups last Monday to investigate alleged police violence after the killing of Mr. Floyd.

The issue was universal, the Ambassador maintained, highlighting the large number of Black Lives Matter protests that have been held in many countries. “As you have seen with demonstrations all over the world, including here in Geneva, so this is a topic that is not about just one country, it goes well beyond that,” she explained.

“When I said it’s not against the United States, I mean there are complaints about a lot of racism in many countries of this world, of course in Europe, but not only; you find it all over the world.”

For seasoned Council-watchers, the day will also be remembered for the fact that Member States and non-governmental organisations convened in the cavernous Assembly Hall, where the near 2,000-seat capacity had to be slashed by around 90 per cent in line with Swiss government health directives.

In more normal times, deliberations happen in the Council’s altogether more colourful - if smaller - home elsewhere in the Palais des Nations, in the Human Rights and Alliance of Civilizations Room – although voting on some 40 draft resolutions is expected to be held there on Thursday afternoon and Friday.

To further prevent possible transmission of the respiratory disease, facemasks – and a few pairs of protective gloves - were almost universally in evidence.

Delegations were also parsed to just one representative rather than the usual two or three people in line with coronavirus social distancing measures.

The decision to resume the Council’s work mirrors deconfinement moves in Switzerland and beyond, as the country reopens its borders with Austria, France and Germany on Monday 15 June.

To date, Switzerland has confirmed more than 31,000 cases of COVID-19 infection and more than 1,670 deaths, according to latest WHO data.

UN experts on racial discrimination call for US reforms

The UN Committee on the Elimination of Racial Discrimination on Monday called on the United States to make immediate structural reforms to end racial discrimination, and to uphold its obligations under the International Convention on the Elimination of All Forms of Racial Discrimination. In its formal statement published online, the Committee urged the US to fully respect the Convention, which it ratified in 1994, and to ensure a wide understanding of the Convention among its law enforcement officials through training and education curricula.

“No one shall be victim of racial discrimination, it’s the essence of the Convention,” said Noureddine Amir, Chairperson of the Committee, adding, “we cannot afford any delay in the promotion of understanding among all races, discontinuing racial profiling and criminalizing racially motivated attacks.”

The Committee, made up of 18 independent experts, expressed its deep concern at the tragic death of George Floyd in Minneapolis, and the recurrence of killings of unarmed African Americans by police officers and individuals over the years. 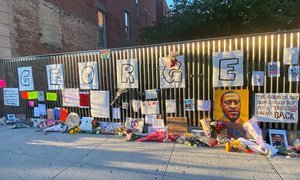 A group of more than twenty senior leaders in the UN, who report directly to Secretary-General António Guterres, and who are African or of African descent, have put their names to a personal and hard-hitting statement published on Friday, expressing their outrage at pervasive and systemic racism, highlighting the need to ‘go beyond and do more’ than just offering condemnation. 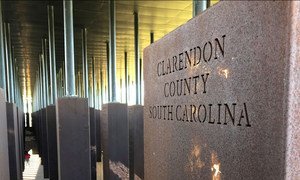