OCHA/Gema Cortes
Doctors and nurses have been raising awareness about COVID-19 during a house-to-house campaign in the Cuaricao neighbourhood of Caracas, Venezuela.
9 June 2020
Humanitarian Aid

The Economic and Social Council (ECOSOC) heard strong appeals on Tuesday for more funds to be steered into the UN’s COVID-19 Global Humanitarian Response Plan, as it opened its annual Humanitarian Affairs Segment – the first to be held via video-teleconference.

Here is how our 18 @CBPFs continued to be at the forefront of 🌍 efforts to help people caught up in humanitarian crises ➡️ https://t.co/Q1GYNp9kKB#InvestInHumanity

“We all need to stand in solidarity with those least able to protect themselves from the virus,” he said.  “This is not only the right thing to do – it is also the only way we can overcome the challenge.”

UN relief chief and emergency coordinator, Mark Lowcock, said that the Response Plan – the international community’s primary fundraising vehicle to respond to the impact of the coronavirus in low and middle-income countries – needs $6.7 billion to cover the period until December.

“Investing now will reduce the scale of the problem and avoid a much more costly response in the years to come”, Mr. Lowcock stated.

Over three days, the Humanitarian Affairs Segment will tackle a host of emerging and pressing humanitarian issues as the United Nations marks its seventy-fifth anniversary this year.

Topics on the agenda range from the situation in the vast Sahel region, to sexual and gender-based violence, assistance for internally displaced persons and addressing the growing complexity of health challenges in humanitarian contexts.

Participants – including Member States, the UN system, development actors, the private sector and other partners - will also discuss ways in which new technology and innovation can make humanitarian work more effective.

$90 billion to safeguard world’s most vulnerable

Warning that the pandemic “has the potential to be catastrophic in the developing world”, Mr. Lowcock said that the cost of protecting the most vulnerable 10 per cent of people in the world’s poorest countries, is about $90 billion.

That is a significant sum, but it also one that is affordable, equal to just 1 per cent of what the world’s richest countries are putting into place to save the global economy, he stated.

He warned against diverting funds from existing humanitarian resources, saying that doing so would be “entirely counter-productive.”  He also called on donors to deliver flexible funding that can make quick and agile decision-making possible.

Going further, Mr. Guterres said that funding should include support to non-governmental organizations at the local, national and international levels, with a particular focus on the specific needs and priorities of women and children.

“At the same time, we must not overlook the wider drivers of suffering around the world, including persistent inequalities, climate change and prolonged conflict”, the Secretary-General said, reiterating his call for an immediate humanitarian ceasefire in all corners of the world.

$1.44 billion plan to respond to Venezuela refugee and migrant needs 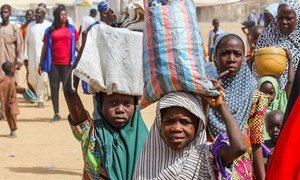 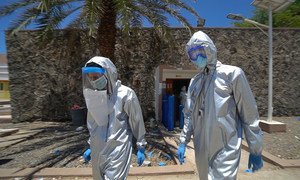