In her appeal to authorities that any action they take to stop the spread of false information should adhere to the principles of legality, necessity, proportionality, Ms. Bachelet said that “in these times of great uncertainty”, citizens had a right to voice their concerns.

UN Human Rights Chief alarmed by clampdown on freedom of expression in Asia-Pacific during #COVID19 & tightening of censorship in several countries. @mbachelet says any actions taken to stop the spread of false information must be proportionate.

Opinions must be heard

“Medical professionals, journalists, human rights defenders and the general public must be allowed to express opinions on vitally important topics of public interest, such as the provision of health care and the handling of the health and socio-economic crisis, and the distribution of relief items,” she said.

From Bangladesh to Vietnam and from Myanmar to the Philippines, the High Commissioner detailed how people had been fined, arrested or attacked for allegedly spreading misinformation online about COVID-19 or for criticizing their Government’s response.

In Cambodia, Ms Bachelet noted that UN Human Rights Office (OHCHR) had documented multiple arrests – including that of a 14-year-old girl - for public comments and social media posts about the pandemic.

“A number have been charged with spreading so-called ‘fake news’ or ‘false information’, alleged incitement to commit a felony, and for allegedly plotting against the Government,” the High Commissioner said.

According to the UN human rights office, 14 individuals remain in detention, including 10 associated with the Cambodia National Rescue Party (CNRP), the main opposition party that was dissolved in 2017.

More generally, the High Commissioner noted that many of the countries she highlighted already had laws to stop alleged “fake news” and online media that raised human rights concerns.

This legislation had also been used in other contexts to deter legitimate speech, especially public debate, criticism of government policy and suppress freedom of expression, she added.

In Myanmar, the Kayin State Court had convicted and sentenced to two years’ imprisonment the chief editor of the Dae Pyaw News Agency, on charges of wrongly publishing an article stating that one person died from the virus, the High Commissioner said.

He was arrested, charged, tried, and convicted in under one week after being accused of making a “statement that could cause or incite public fear or mutiny”.

While recognising the need to restrict misinformation or disinformation to protect public health - or incitement of hatred towards minority groups - this should not result in censorship, either purposeful or unintentional, Ms. Bachelet insisted.

“While Governments may have a legitimate interest in controlling the spread of misinformation in a volatile and sensitive context, this must be proportionate and protect freedom of expression”, she said.

♦ Receive daily updates directly in your inbox - Subscribe here to a topic.
♦ Download the UN News app for your iOS or Android devices.
OHCHR|freedom of expression|COVID-19|coronavirus

The UN human rights office (OHCHR) has welcomed steps taken by social media companies to prevent their platforms from being used to promote hatred, violence and misinformation, Spokesperson Rupert Colville said on Friday. 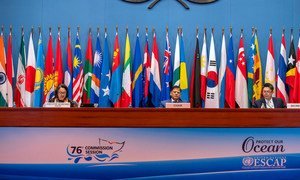 Gathering together at the top UN intergovernmental body in Asia and the Pacific on Thursday, countries of the vast region of more than four billion people, urged greater measures that reinforce global solidarity in ending the COVID-19 pandemic.